As soil organic matter increases with conservation tillage systems, soil properties change for the better in many ways. Soil structure and soil-water relationships are improved, and the soil better resists compaction and erosion.

Soil organic matter impacts soil-water characteristics including the infiltration, distribution and retention of water in soil. For water to infiltrate into soil, pores or channels have to be open at the soil surface. These are often referred to as macropores, meaning large pores. As soil organic matter increases, more water-stable aggregates are formed, which increases the number of macropores and improves water infiltration [6, 18, 54]. 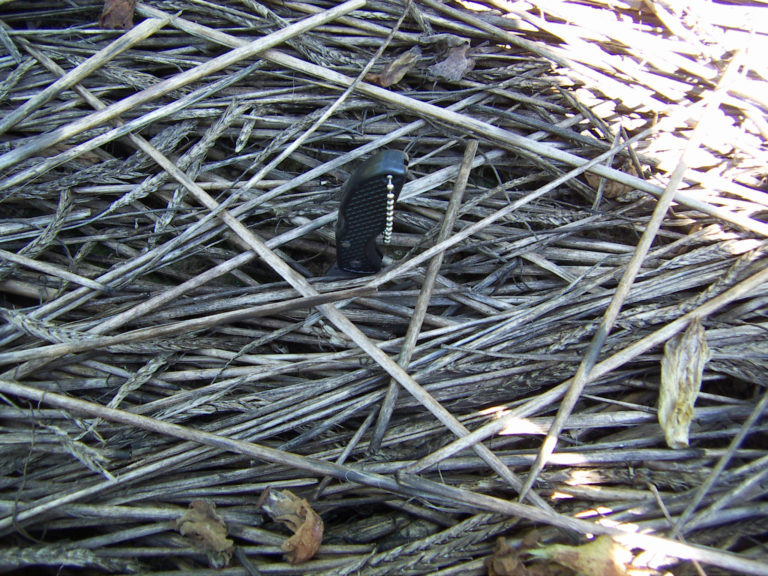 In addition to its beneficial effect on soil porosity, soil organic matter absorbs and holds water that has infiltrated into soil. So, as soil organic matter increases, the amount of water held in the soil for plant use also increases. Practices that keep the soil covered, such as cover crops or leaving crop residues in the field (Figure 3.4), help protect soil aggregates and keep macropores open by reducing crust formation. Tillage disrupts large pores in the short term and intermediate-sized pores in the long term. This reduction in porosity decreases infiltration and soil-water retention, and degrades soil quality and productivity [35]. 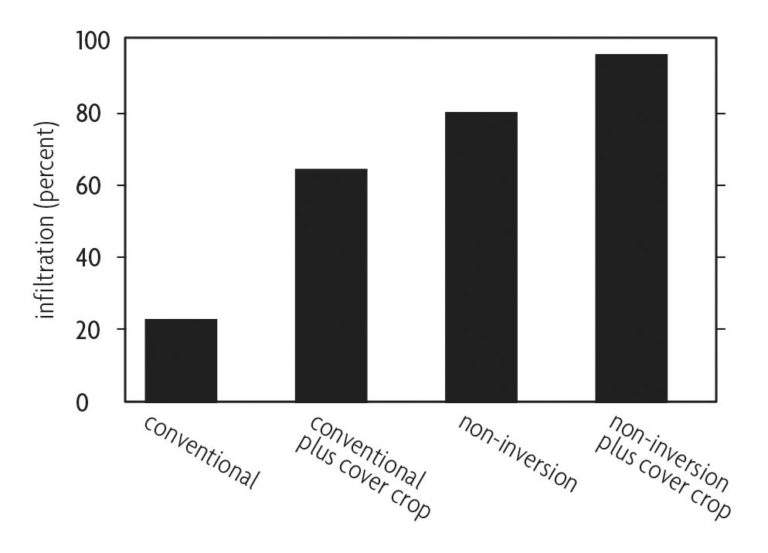 A long-term study in central Alabama illustrates the relationship between conservation tillage and water storage. In the study, soil managed for 10 years with only in-row subsoiling to a 15-inch depth had twice as much soil organic matter and 21 percent more water-stable aggregates than soil managed with conventional disking and chisel plowing (Table 3.1). As a result, water infiltration was also greater. The use of winter cover crops further increased water infiltration. Figure 3.5 shows that 80 percent of a 2-inch simulated rainfall infiltrated when non-inversion tillage was used, and infiltration increased to 96 percent when winter cover crops were added.

Water that does not infiltrate into the soil first ponds on the surface and then moves across the soil surface. As water flows over the soil, soil erosion occurs. However, soil under conservation tillage is more resistant to erosion because large aggregates and the glue holding particles together protect the soil particles. Further, plant residues and cover crops protect the soil surface from raindrop impact, reducing soil particle detachment and overall erosion. 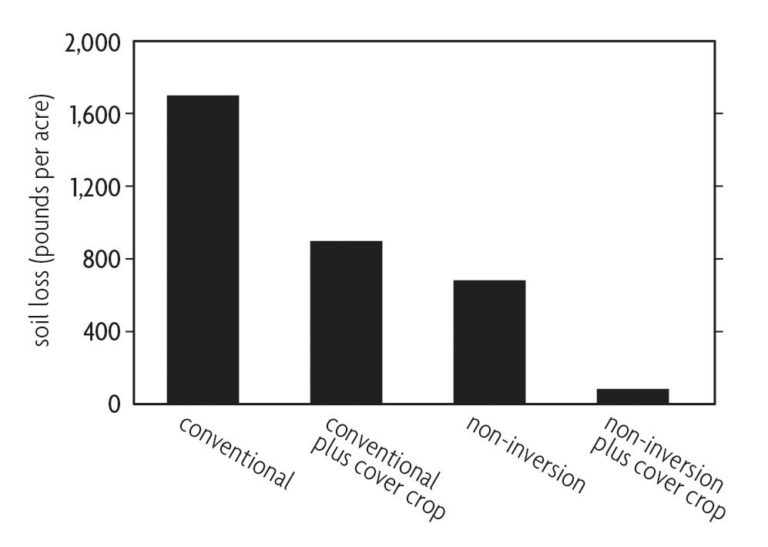 Erosion is a silent thief of productivity. It removes fertile surface-soil layers as well as organic matter needed to protect the soil. Conservation-management practices, such as reduced tillage or no-till and cover crops, reduce soil loss from fields. Figure 3.6 shows that non-inversion tillage reduces soil loss when compared to conventional tillage. Soil loss is the lowest when non-inversion tillage is combined with cover crops. These practices not only help to maintain or improve soil quality and productivity, but also improve water quality.

Compaction is caused by excessive load or traffic on a soil and by natural processes. Soil conditions, including moisture, organic matter and the presence of living roots from crops or cover crops, affect a soil’s resistance to compaction. Some soils are more prone to soil compaction than others. In parts of the Southeast with sandy soils, conventionally managed fields with little surface cover tend to have compaction problems due to low organic matter and high winter rainfall. These conditions cause sand particles to pack and a compaction layer to form. Soil organic matter improves soil structure and thus increases resistance to compaction.

Practices such as in-row, non-inversion subsoiling minimize soil-surface disruption and organic-matter losses through decomposition. These practices are preferred over those that invert the soil to alleviate compaction.