The Alabama and Mississippi Blackland Prairie major land resource area (MLRA 135A) has a land area of 6,370 square miles (4,076,800 acres) in central Alabama and eastern Mississippi [27] (Figure 19.1). About 53 percent of the total area is in Alabama and 47 percent in Mississippi. The region has a rolling topography with elevations ranging 100–590 feet. This area was once known as the “Canebrake” and was the center of cotton production in the 19th and early 20th centuries. Today, it is called the “Black Belt” or “Blackland Prairie.” 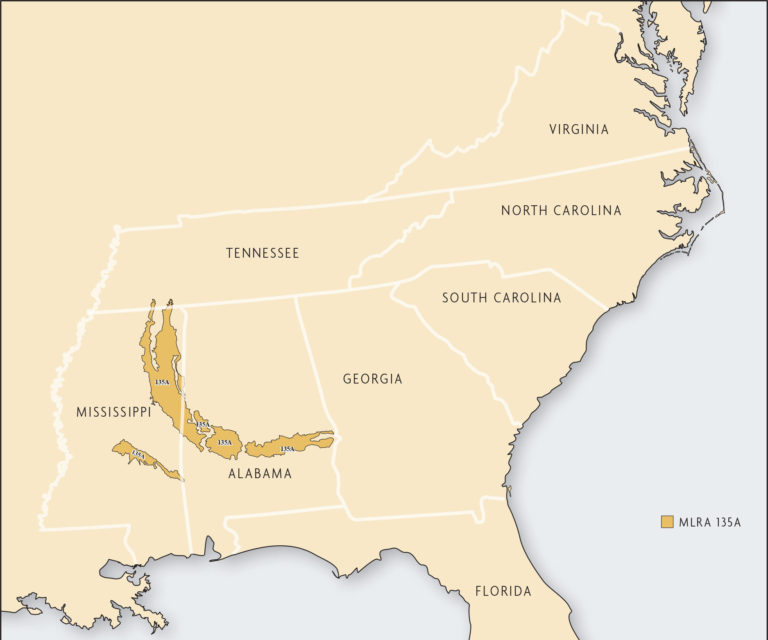 The climate is hot and humid, with a long growing season. Annual frost-free days average 250 days across the region. Average annual rainfall is between 53–61 inches with wet winters, wet springs and relatively dry autumns. Although high intensity, convective thunderstorms occur during the summer, periods of short-term drought occur frequently during the growing season. Due to the depth to groundwater for irrigation wells and the associated pumping costs, little row-crop acreage is irrigated. A few farms have constructed large surface-water impoundment structures for supplemental irrigation of limited acreage.

Currently, about 16 percent of the land is used for crop production, 29 percent is in grasslands and 48 percent is in forests [27]. The rest is in urban or industrial development or water, including aquaculture production, which is expanding. Major crops include corn, cotton, soybeans and small grains. Most of the acreage in recent years has been in corn and soybean production with some wheat and wheat>soybean double-cropping. Beef cattle, principally cow-calf operations, occupy most of the grazing lands. At one time, dairies were a major user of the grassland areas. They have been replaced by catfish farms and other agricultural enterprises.