The Southern Piedmont major land resource area (MLRA 136) extends through Alabama, Georgia, South Carolina, North Carolina and Virginia, with a land area of 64,395 square miles (41,212,800 acres) (Figure 20.1). The area is a plateau just below the Appalachian Mountains and above the Coastal Plain, with elevations ranging 328–1,312 feet above sea level. The region is dissected by rivers and streams that produce well-defined drainage patterns with narrow to fairly broad upland ridge tops and short slopes adjacent to the major streams. The intermittent valley floors are narrow and occupy 10 percent or less of the land area. 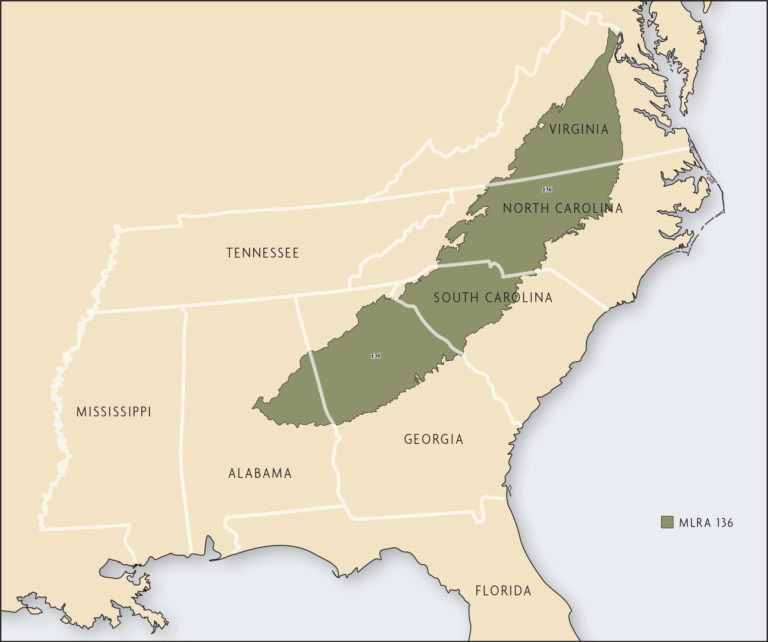 The climate is relatively mild. Average annual temperatures in the region range from 57°F to 64°F with 205–235 frost-free days. Average annual precipitation is 45–55 inches, with the lowest rainfall generally in autumn. Much of the rainfall during the spring and summer is from high-intensity thunderstorms. In addition, the area is prone to large amounts of rainfall from tropical storms that arrive from the Atlantic Ocean or Gulf of Mexico. These two types of storms are responsible for most of the erosion, particularly when the storms occur during the spring planting season. Snowfall is infrequent and light. Precipitation, perennial streams and lakes are the major water sources. Groundwater supplies are relatively small.

Soils were formed from upland weathered rock sediment deposited by rivers or creeks, or by erosion in the valleys. Cecil and related soils are predominant in much of the Southern Piedmont. Surface horizons of Cecil soils are typified by sandy loams, or sandier if slightly eroded, and they approach sandy clay loam if severely eroded. The underlying B horizon is red, has moderate to strong subangular blocky structure and contains 40–60 percent clay. The soils are naturally infertile, with low cation exchange capacities and low base saturations. They are deep and usually well drained.

Early descriptions of the region by European settlers indicated that hardwood forest dominated the landscape but that areas of grasslands and savannas also existed. Native American settlements common in the Southern Piedmont contained agricultural fields and other larger openings as part of the landscape. Beginning in the late 1700s much of the land was cleared for cultivation. From 1800–1920, corn, cotton and tobacco predominated row crop agriculture. During this period, conventional farming practices with clean tillage exposed the highly erodible soils to intensive rainfall with disastrous results. Significant soil erosion occurred and most of the topsoil was lost. Research indicates cumulative soil losses of 5–10 inches throughout the region from 1700–1970 [19]. Yield differences between slightly eroded and severely eroded soils can range 40–100 percent unless corrective treatments other than fertilizers are used, such as rebuilding soil organic matter [7].

Beginning in the late 1930s, federal programs to promote soil conservation resulted in better land management, changes in cropping practices and significant reductions in soil erosion. Today, a majority of the land previously in row-crop agriculture has been converted to pasture and mixed stands of pine and hardwoods. Significant adoption of conservation tillage systems began in the late 1970s with the development of better equipment and weed control chemicals.

There are nearly 3.7 million acres of farmland in the Southern Piedmont, with about 1.2 million acres used for row-crop production and the rest used for pasture and hay production, and other agricultural enterprises [12]. Although more land is in pasture or forage production, crops such as corn, cotton, soybeans and small grains contribute to the agricultural enterprises in many counties. The extensive forage production supports beef cattle, dairy cattle, horses and smaller livestock. A major contributor to farm income in the region is poultry production. Most farms in the region are small, with an average farm size of 122 acres and a median farm size of 71 acres. The number of farms has declined over the past 10–15 years while the size of farms has increased [12]. Urbanization around major metropolitan areas has contributed to the decline in farmland.