Hydrology is the study of the movement, distribution and quality of water. The central theme of hydrology is that water moves throughout the earth’s crust and atmosphere by various pathways (Figure 14.1). Water evaporates from land and water bodies and rises into the atmosphere to form clouds. The clouds then produce precipitation that falls back on the land and water bodies. When water falls on the ground as rain, hail or snow, it can soak into the ground, a process known as infiltration. The infiltrated water is stored in the root zone where it is available to plants, in the unsaturated soil below the plant roots, or in porous underground rocks and sediments called aquifers. Water that does not infiltrate is absorbed directly by plants and plant residues, ponds at the soil surface, or runs off the land into rivers and lakes, eventually ending up in the oceans. Water on the land surface and in water bodies evaporates, and the cycle begins again. 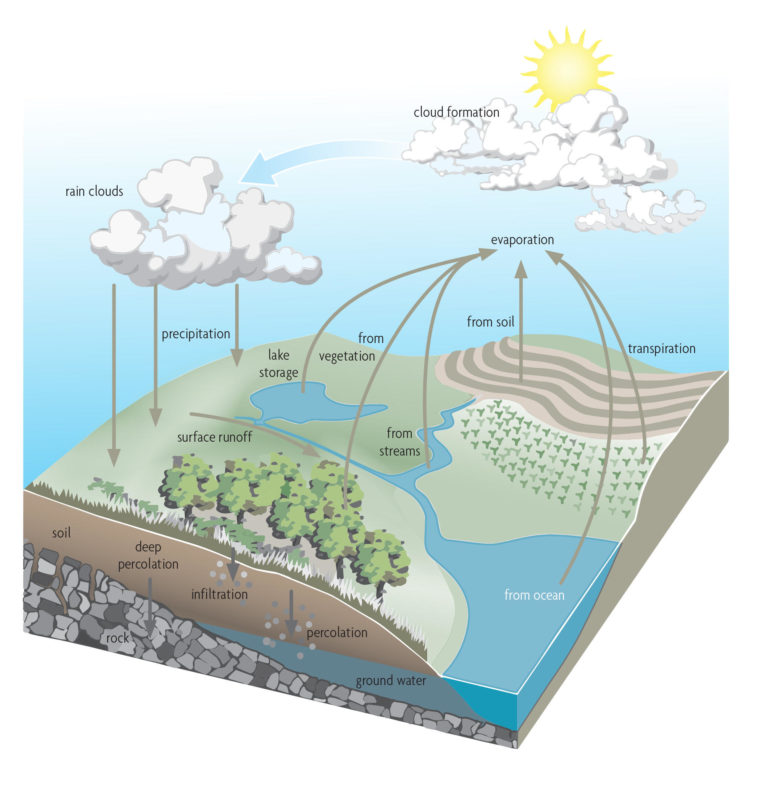 FIGURE 14.1. The hydrologic cycle. The transfer of water from precipitation to surface water and ground water, to storage and runoff, and eventually back to the atmosphere is an ongoing cycle. Source: [4]

The component of the hydrologic cycle that is important for crop production is rain that falls on fields and either runs off or infiltrates into the soil. The amount of rainfall that soaks into the ground depends upon the rainfall intensity, land slope, soil type, soil water content, compaction level and amount and type of vegetation or plant residue on the surface.

Rain tends to move into the soil most quickly at the beginning of a rainfall event unless the soil is saturated, meaning it cannot hold any more water. If the soil is not saturated at the beginning of a rainfall, it is able to absorb more water as well as transport water to lower portions of the soil profile. As the rainfall event continues, the capacity of the soil to hold additional water decreases until the soil is eventually saturated. When saturated, the rate that water can infiltrate is limited by the rate of downward movement of water within the soil. If rainfall intensity exceeds the rate of downward movement, excess rainfall will either run off or pond on the soil surface. If there is no downward movement of water, all rainfall will run off or pond just as if it fell on a paved surface.

Any water that infiltrates into the soil and does not move out of the root zone is available for crop use. Of the factors affecting the amount of infiltration, the ones that can be managed through agricultural practices include soil compaction, soil water content, and the amount and type of vegetation or plant residue on the soil surface. Agricultural practices that minimize runoff and erosion and that maximize infiltration and water-holding capacity are typically beneficial for crop production. Infiltration can be enhanced by reducing compaction caused when raindrops hit the soil surface, by increasing the soil’s water-holding capacity and by increasing the rate that water can move into the soil. One practice that affects all three is conservation tillage. The positive and negative aspects of conservation tillage on water management, its impact on irrigation, and methods that can be used to monitor its impact on soil water are discussed in this chapter.