Termination methods include rolling/crimping, herbicide application, mowing, burning and incorporation. Rolling/crimping results in a mat of cover crop residue on the soil surface. Plants are flattened by the roller and crimped at regular intervals in one pass. The objective is to discourage root growth by injuring the plant without cutting the stem. All the plants fall in the same direction, which reduces residue accumulation on equipment and improves seed and transplant placement.

Roll/crimp most cover crops when they are in the reproductive stage: for cereal grains, early milk to soft dough; for clovers, mid-bloom; and for vetch, early bloom. For other cover crops like cowpeas, sorghum or sunn hemp, there is not much research available. Roll/crimp these cover crops when they reach maturity. Allow tall growing covers like sunn hemp and sorghum to reach 3–3.5-feet tall before rolling. When selecting the termination date, consider the goal of maximizing biomass production as well as the needs of the following crop. 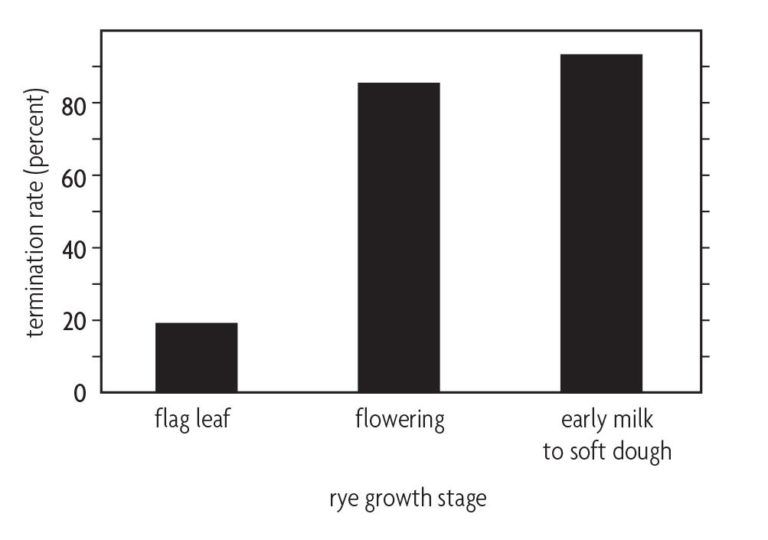 In the United States, cover crops are commonly terminated with herbicides, usually glyphosate. Spraying is fast, effective and inexpensive. Herbicide termination provides the flexibility to kill the cover crop in any growth stage. Spraying can be delayed to maximize cover crop biomass and gain the greatest benefit. When tall cover crops such as cereal rye, sudan grass or sunn hemp are terminated with herbicides, they fall in different directions. This results in seed or transplant placement problems, accumulation of residue on planting units, and frequent stops to clean the equipment.

Mowing is a popular method of cover crop termination in no-till vegetable and organic production systems. If mowing occurs early in cover crop growth, regrowth can occur and the cover crop will compete with the cash crop for nutrients and water. In addition, the residues decompose more quickly than rolled/crimped residues, which reduces the residues’ effectiveness as mulch.

Although burning cover crops still occurs, cover crop benefits are completely lost. Heat from burning residue causes the soil surface to become hydrophobic, so rainfall infiltration decreases and runoff increases. Burning converts the carbon in the cover crop biomass to carbon dioxide so most of it is lost from the system rather than being stored in the soil. Toxic gases emitted to the atmosphere also make this method environmentally unfriendly. Incorporation preserves organic matter, but the soil surface is fully exposed. This leads to rainfall runoff and erosion.