Historically, conventional tillage for many crops included bedding the land in the fall and planting on the “stale seedbed” in the spring. Bedding involves using tillage and plowing to elevate the soil surface of flat land into rows of broad low ridges that are separated by shallow and parallel channels that allow for drainage [26]. This helps assure adequate drainage for spring planting into the dry soil on top of the ridge or seedbed. When the stale seedbed technique is used, a seedbed is prepared prior to planting and weeds are allowed to emerge. The weeds are terminated prior to planting the cash crop [14]. Spring chisel plowing followed by disking and/or harrowing can be done if moisture conditions are suitable. Because of the gentle slopes of most arable Blackland Prairie soils, this technique, with 8–10 conventional tillage trips across the field annually for bedding and cultivation, often results in deep gullies forming between the rows or blowouts if the rows were contoured with the land. Blowouts occur during heavy rainfall events when water builds up behind a ridge and eventually overflows, taking the soil with it. Erosion rates of 12–25 tons per acre occur on bare fallow soil with a 3 percent slope using intensive tillage, meaning both a fall and spring chiseling [13]. These practices also create the highest runoff. In both no-till and conservation tillage systems, 80–85 percent of the soil erosion occurs from March through June [13]. In conventional tillage systems, spring tillage occurs when soil erosion potential is the highest due to severe thunderstorms that deliver large amounts of water in a short amount of time. After almost 200 years of erosion, many soils of the Blackland Prairie are no longer black. Both farmers and researchers have been looking for ways to incorporate the principles of conservation tillage systems to reduce erosion on these difficult soils.

Most of the tillage research in the Blackland Prairie has involved either corn or soybeans in a monoculture or in a rotation. Monocropped, true no-till soybeans produced lower yields than conventional tillage on the clayey soils of the region [4, 5, 11, 10]. This may be associated with drainage or other factors. Several studies indicate no-till yields on moderately drained soils were equal to or greater than conventional tillage [1, 7, 9, 19]. Conversely, on poorly drained soils, no-till corn often had slower emergence and growth, and yields were lower than conventional tillage. The lower yields with no-till may be due to lower soil temperatures that reduce growth in the wetter, poorly drained soils [10, 17]. Other reasons include increased incidences of soil pathogens [8, 29] and irregular emergence of seedlings [28].

Crop yields in the Blackland Prairie are generally higher when crops are grown on raised beds due to better soil moisture conditions [16]. The beds are especially beneficial to corn emergence and early-season growth during periods of wet weather that often occur in March. Ridge-tillage is an alternative method to fall bedding. The ridge (bed) is formed through the use of a ridge-till cultivator once or twice during the growing season. This implement is equipped with two smaller sweeps per row and one large sweep that runs in the row middle and creates a 4- to 6-inch-high bed as it passes through the field. In studies on a Houston clay soil and a Vaiden silty clay loam soil, continuous ridge-tillage soybean yields were equal to conventional tillage and 12 percent higher than no-till. In continuous cotton with 30-inch row spacing, ridge-tillage yields were equal to conventional tillage [15, 18]. There has been little reported yield increase with ridge-tillage and a corn>soybean or corn>cotton rotation. Ridge-tillage during the growing season can reduce soil erosion. Stale seedbed systems combined with crop rotation minimize production costs, enhance productivity and meet conservation compliance [16]. The stale seedbed system is used on new raised beds formed by ridge-tillage after the previous growing season or on old raised beds that will be used again without tillage.

Although most crops are grown on beds, no-till corn can be planted flat and grown successfully on sloping land. Planting flat means without a raised bed. Corn yields in no-till systems planted flat are more variable than yields in conventional tillage systems without raised beds, but no-till had a higher three-year average yield and greater returns above total costs [22].

Where tillage must be done, fall chiseling without bush hogging corn stubble and/or fall bedding has distinct advantages over spring chiseling. Unlike soils in the Southern Coastal Plain or Southern Piedmont, the shrink-swell clays in this region will crumble when wet, although they may seem very hard when dry. In these soils, minimizing soil disturbance preserves soil structure and soil moisture, and can result in successful reduced-tillage crop production. Fall tillage with a one-pass coulter-chisel-harrow system leaves the ground rough with sufficient residue when used after corn harvest (Figure 19.4). Residue protects the soil during the winter and reduces runoff and erosion. Preparing the seedbed in the fall allows weeds to germinate and be terminated before planting the cash crop. Soybeans planted into a stale-seedbed system had the highest three-year average yield. The returns above total costs for this system were eight times more than conventional tillage and 44 percent more than no-till [22]. 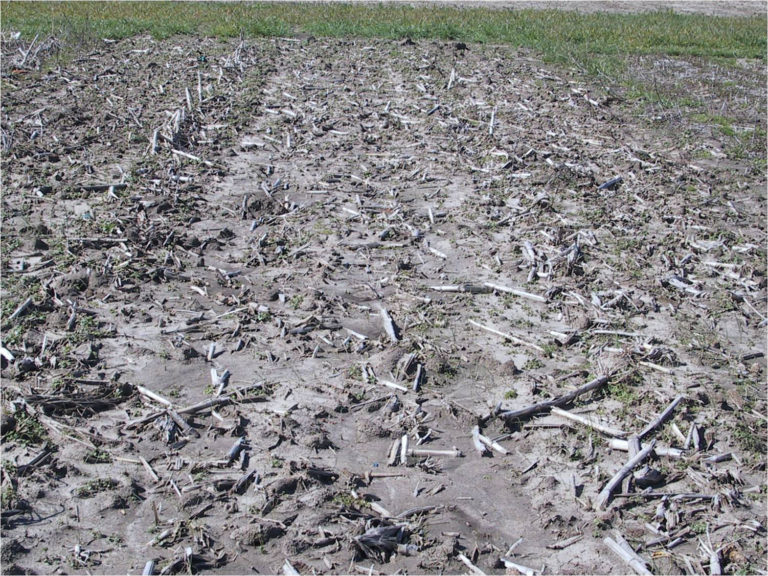 FIGURE 19.4. A Blackland Prairie field ready for spring planting. The field was fall tilled with a one-pass coulterchisel-harrow and left fallow through the winter. Note residue from the previous year’s corn crop.

Deep tillage, including moldboard plowing, paratilling, ripping and subsoiling, is unnecessary on most Blackland Prairie soils, especially the cracking soils. There are no reported yield advantages to deep tillage with corn or soybeans [4, 15]. In fact, deep tillage caused water to seep down the long, gently rolling topography and pool at the end of the field.