This section provides descriptions of the plant-parasitic nematodes of economic importance in the southeastern United States. Host range, soil texture preference, impact of tillage and potential yield reductions are reviewed for each nematode species.

The peanut root-knot nematode is the most important root-knot nematode in peanut production. It is also a major pathogen of soybeans, particularly in regions where peanuts are produced [13]. This species is abundant in warmer regions and seldom found where temperatures frequently reach freezing.

The javanese root-knot is an economic species on soybeans and is the second most common Meloidogyne species [30]. It is more prevalent in hot, dry regions and does not survive in cold climates. The northern root-knot nematode usually occurs in cooler environments and is rarely found in Southeastern cropping regions [30]. The northern root-knot has a wide host range but does not parasitize grassy plants such as rye, wheat and oats. 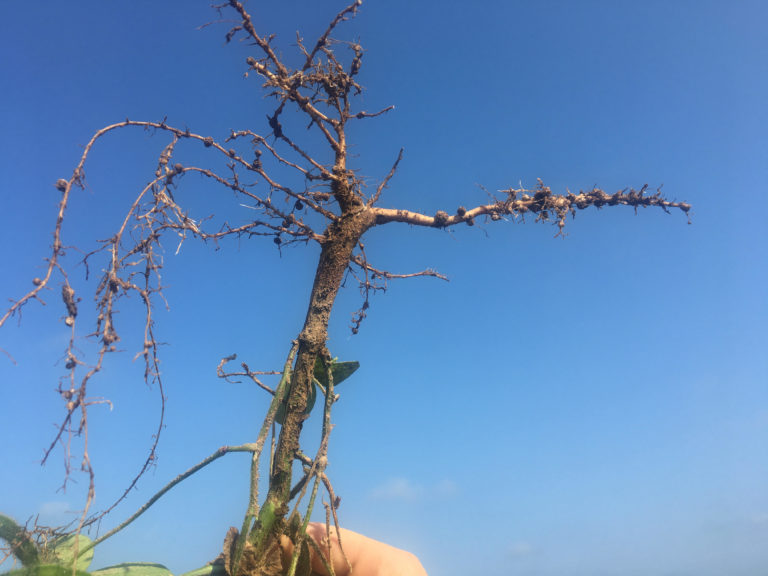 FIGURE 12.6. Symptoms of root-knot nematode galling on cotton roots, at no magnification.

Root galling is the classic symptom of root-knot nematode infections (Figure 12.6). Root galls vary in size and number depending upon the host crop, the level of the initial infection and the root-knot species [30]. Above-ground foliar symptoms may include a slight stunting to severely suppressed growth, which often occurs in irregular patterns in the field (Figure 12.7 and Figure 12.8). Yellowing (chlorosis) of the foliage may also occur. Generally, plant death is not associated with root-knot nematodes unless they are combined with a fungal disease such as Fusarium wilt. In cotton and soybeans, early-foliage senescence has also been associated with root-knot nematode infections. 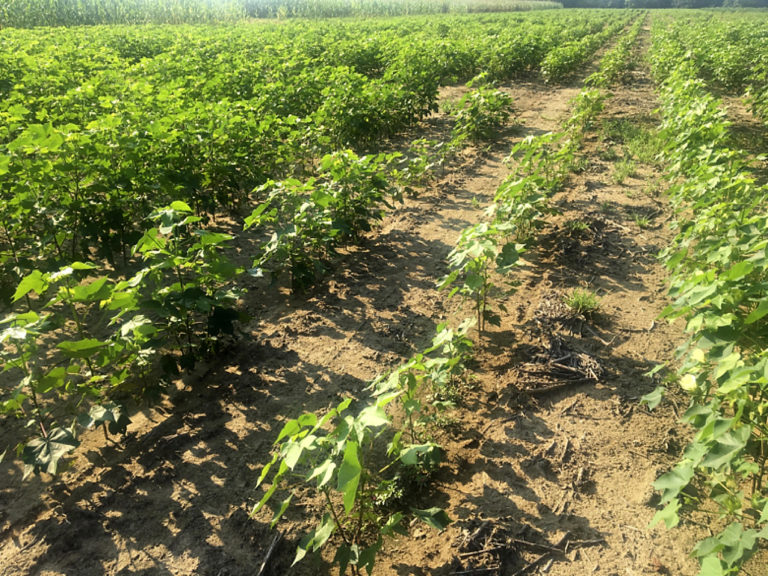 FIGURE 12.7. Symptoms in recently infested fields include areas of stunted and uneven plant growth, giving the field an irregular, jagged appearance. Often weeds are seen later in the season due to poor canopy coverage. This cotton is growing in a field infested with root-knot nematodes. 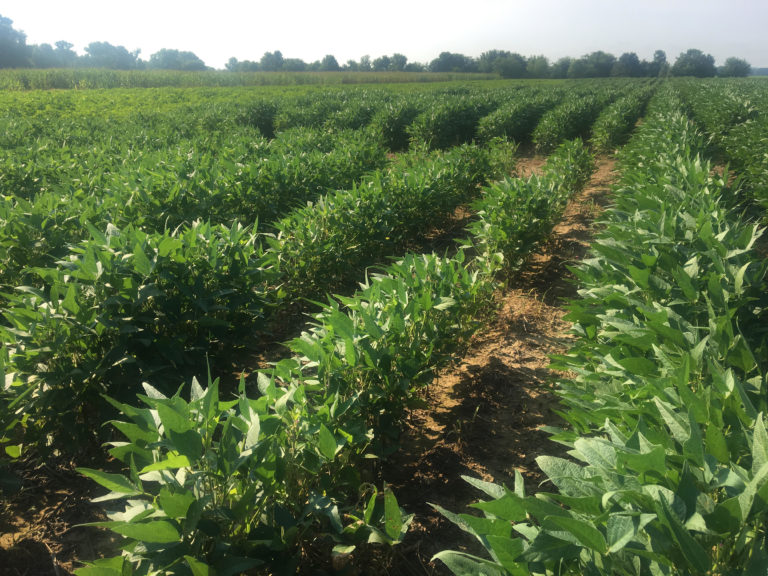 FIGURE 12.8. Nematode foliar symptoms in soybeans may include a slight stunting to severely suppressed growth, which often occurs in irregular patterns in the field. This is referred to as the wave effect. These soybeans are growing in a field infested with root-knot nematodes.

There are nine species of the reniform nematode, but only Rotylenchulus reniformis is considered an economic pest to cotton and soybeans in the Southeast [11]. This nematode was initially identified in Hawaii, later found in South Carolina, and more recently found from Virginia to Texas. It is tropical to subtropical and has not been reported in areas with extended freezing temperatures. The distribution of the reniform nematode is not limited by soil type. No consistent relationships have been determined between the presence of the reniform nematode and soil texture, soil pH or soil moisture. In general, the finer-textured silt and clay soils support larger reniform populations than the coarser-textured sandy soils [14, 29]. The lack of water stress during crop production appears to facilitate higher reniform population levels during the growing season. The host range of the reniform is extensive, including many dicotyledonous weed plants such as morning glories, amaranths, sidas and sickle pods [10,15, 29]. However, corn, wheat and peanuts are not considered hosts for this nematode.

Cotton yield losses of 50 percent and soybean losses of 33 percent have been reported [9, 11, 15]. Losses vary depending upon initial reniform population levels, crop cultivar tolerance and environmental stress during crop production. In the Mississippi Delta region, it is not uncommon to find reniform numbers as high as 40,000 to 60,000 per pint of soil following cotton production [17]. However, in many soil types across the Southeast, reniform populations may only reach 5,000 to 20,000 per pint of soil. 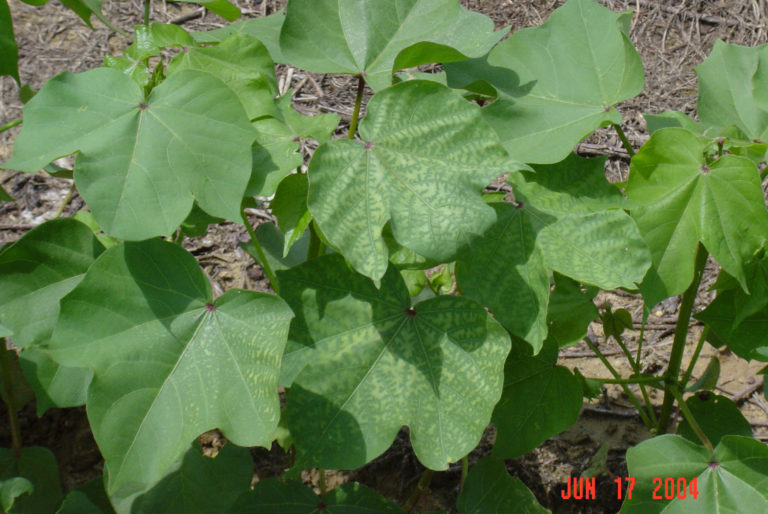 The reniform nematode has a debilitating effect on the growth and yield of cotton and soybean plants. Symptoms in recently infested fields include areas of stunted and uneven plant growth, giving the field an irregular jagged appearance [11, 20, 29]. After fields have been infested for years or tilled frequently, the populations become more evenly distributed and stunted plant growth is not obvious. Chlorosis is not generally evident with reniform disease but with high nematode populations, mature leaves may exhibit interveinal yellowing resembling a potassium deficiency [11] (Figure 12.9). The reniform nematode does not produce root galls, thus symptoms are non-distinctive. Infected root systems are often small with limited secondary root development. This nematode is often overlooked in the field because root galls are not produced. Soil particles adhere to the egg mass, making visual observations of infection difficult.

The soybean cyst nematode (Heterodera glycines) is the most serious nematode pest of soybeans in the United States [20]. It was first found in North Carolina in 1954 and has been identified in 27 central and southern soybean-producing states. The soybean cyst nematode is a sexually reproductive nematode with multiple defined pathogenic races or types. These different races can cause different amounts of stress to the plants, with some races being more yield limiting than others [24, 28]. Physiological races are subspecies of plant parasitic nematodes that are morphologically identical but may infect and reproduce on a given set of plant hosts in different ways. The soybean cyst nematode is a temperate nematode and does poorly in warmer areas including the panhandle of Florida.

Foliar symptoms of slight to severe stunting and chlorosis are often seen with soybean cyst nematode infections. The foliar symptoms are non-distinctive and resemble those of other soybean pathogens and environmental stresses. The immature white females or tan cyst stage can be observed on the root system to confirm the presence of the nematode in a field (Figure 12.2). The irregular zigzag lines on the cyst cuticle can be seen with a hand lens and aid in identification.

There are multiple species of the lance nematode but only Hoplolaimus columbus, H. galeatus, and H. magnistylus are considered economic pests to cotton, soybeans and corn in the United States [25]. Hoplolaimus columbus is considered the most pathogenic lance species on cotton and soybeans [9, 11]. This nematode has been reported to reduce cotton and soybean yields by 70 percent in Georgia, North Carolina and South Carolina. Hoplolaimus galeatus and H. magnistylus are the most frequently identified lance species in Alabama, Arkansas, Louisiana, Mississippi and Tennessee. These two species have been reported to cause damage to cotton and corn [38]. Lance nematodes can feed as migratory parasites on the exterior or interior of root systems, with all life stages present in the root system and soil. Sandy soils are most often associated with higher lance nematodes populations.

The most common symptoms of lance nematode infection are unexplained yield losses and stunting. A slight yellowing of the foliage may occur on cotton with severe chlorosis on soybeans. Due to its migratory nature, root systems are discolored or necrotic, with a truncated taproot and reduced number of feeder or secondary roots. A necrotic root system is indicative of lance nematode infestations. This nematode cannot be seen without the aid of a dissecting microscope. The severity of the damage in a crop is most often dependent on population numbers, soil type and soil moisture.

Multiple species of the lesion nematode, Pratylenchus spp., cause economic damage to corn, soybeans and wheat. Significant yield losses in corn in the Midwest are more frequently caused by P. hexincisus, P. penetrans and P.scribneri, while P. zeae and P. brachyurus are the predominant species of the Southeast [38]. The five species common on corn, P. alleni, P. coffeae, P. neglectus, P. safaensis and P. vulnus, can cause yield losses in a soybean crop. In wheat, P. neglectus and P. thornei are the principle species considered to limit yields. All lesion nematodes are migratory and feed inside the root cortex. However, they will also leave the root to migrate to other roots, and will feed on roots from the exterior.

Symptoms are predominantly the result of feeding and migration through the root system, causing lesions and necrosis of the fibrous and coarse roots on corn and wheat, and of the secondary and taproot on soybeans. Heavy infestations cause root tissues to slough off. The nematode feeding areas serve as infection sites for soilborne pathogens that often enhance disease severity and further reduce yields. Foliar growth appears stunted and often chlorotic in localized patches in the field. When soil moisture is limited, yield reductions are often increased.

Yield losses in corn are estimated to average 26 percent when infested with Pratylenchus spp. Cultivars of corn, soybeans and wheat vary in susceptibility. Often, resistance to other nematodes, such as the soybean cyst nematode in soybeans, does not impart any resistance to the lesion nematodes. The multiple species of the lesion nematode increase the potential host range and makes rotations problematic.

This nematode is widely distributed across the Southeast in sandy soils, usually those with 85 percent or greater sand content [3]. Multiple species are known but B. longicaudatus is considered the most damaging to crops. It has been reported to cause serious economic damage to cotton, soybeans and peanuts at population numbers as low as 10 per pint of soil at planting. Population numbers of this nematode are often higher in the soil profile, at 6–12 inches deep.

Plants parasitized by the sting nematode are often stunted, with a limited root system. Affected plants are found in clusters throughout the field. Corn, soybeans and peanuts may appear to be suffering from a nutrient deficiency, with chlorotic foliage on a stunted plant that wilts readily in the heat [9, 13, 38]. Roots may have sunken necrotic lesions and are often shortened and thick. Watermelons and tobacco are considered good rotation crops for fields infested with the sting nematode.

The stubby root nematode is often found in sandy soils in the southeastern United States where corn is grown. It was considered an economic pest of corn before the use of granular nematicides. The rise in corn acreage in the Southeast has increased the presence of this nematode [3, 38]. The main symptom of infection, as suggested by its name, is a stunted stubby appearance to the root system that can be incorrectly diagnosed as herbicide damage. The shoot of the corn plant may appear stunted with chlorotic foliage. The nematode is often found in large irregular areas in a field. Tillage tends to reduce numbers of this parasite, as does rotation to peanuts or soybeans.