The characteristics of the farm and region determine the cash crops and cover crops that can be successfully grown. Climate, soils, markets, government programs and producer preferences all influence the crops selected. Choosing the right crops and rotations will foster economic and environmental sustainability [4].

Climate determines the crops that can be grown due to both growing-season factors and its long-term effect on soils. It influences crop yields through its effect on plant growth, pest and disease pressure, and water availability. Climate has long-range impacts on soil characteristics such as organic-matter content, nutrient cycling and movement, erosion, and ultimately the soil classification.

Plants naturally evolved over time to favor their regional climatic conditions. Figure 1 in the appendix shows a map of long-term rainfall averages in the United States. Figure 2 in the appendix shows a map of natural vegetative cover across the United States. Comparing the two maps shows how rainfall influences vegetative cover. Forests are more prevalent in the Eastern United States where there is more rainfall. The higher rainfall coupled with warm temperatures accounts for the well-leached, low organic-matter soils common in the Southeast as microbial processes can quickly degrade organic matter. Tall- and short-season grasses are predominant west of 100°W longitude where drier and desert conditions persist. The 100°W longitude line runs through the approximate centers of North Dakota and Texas.

Crops commonly grown in the humid, temperate Southeast are adapted to the region’s climate. When evaluating crops and available varieties for a rotation, determine if a variety’s preferred climate matches the farm’s climate. Consider the farm’s latitude, elevation and other site-specific factors that affect local climate.

Soil characteristics impact the types of crops that can be grown successfully, as well as crop production management. The cation exchange capacity (CEC), soil texture and organic-matter content are particularly important soil properties. Soils provide pores for water and air retention, anchor the plants and have ion exchange sites. These properties affect nutrient retention, water-holding capacity and the microbial population for nutrient cycling.

Soil CEC refers to the number of negatively charged sites on soil particles and is an indicator of soil fertility. These sites attract cations, positively charged nutrients, from fertilizer as well as cations released during organic-matter decomposition. The nutrients are held on the sites in the root zone, available for plant uptake. Soils with a higher CEC can have more available nutrients for plant growth since they can hold more nutrients in the root zone. The soil orders that formed in the United States were influenced by regional climate. Ultisols are prevalent throughout most of the Southeast, with Alfisols common in the western part of the region. The fertility of these well-leached, low organic-matter soils is much lower than the Mollisol soils of the fertile Midwest (Table 7.3). 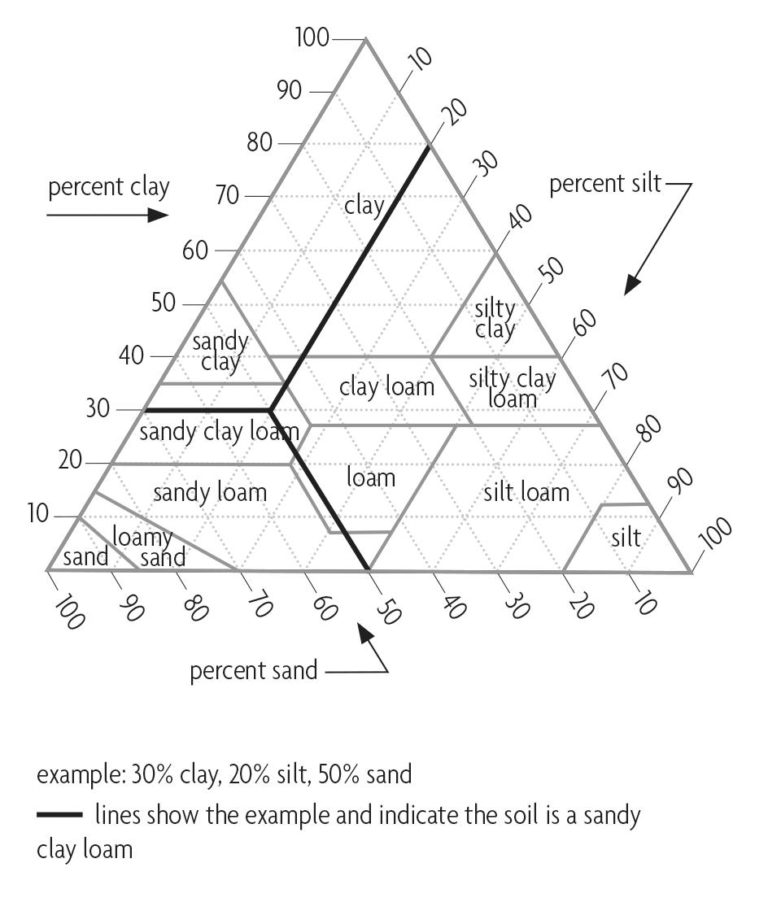 FIGURE 7.1. Soil triangle used to describe soil texture [23]. To determine a soil’s classification, identify where its component percentages of clay, silt and sand intersect within the triangle. The arrow on each side indicates the direction to follow. For example, a soil that is 30 percent clay, 20 percent silt and 50 percent sand is classified as a sandy clay loam (i.e., the three components intersect within that section of the triangle).

Soil texture is defined by the percentages of sand, silt and clay in the soil (Figure 7.1). Sandy soils have a low water-holding capacity and a low CEC. Ions, negatively and positively charged, such as nitrate (an anion) and potassium (a cation) are more likely to be leached out of the root zone in sandy soils due to fast movement of water and lower CEC. Soils with higher silt or clay percentages have a higher CEC and a greater water-holding capacity. They are less likely to leach ions. This difference affects crop selection and production management including fertilizer-application timing.

The soil texture is an inherent field condition that cannot be cost-effectively changed using chemical fertilizers, additives or mechanical tillage. For example, it is difficult to change a highly leached Ultisol soil into a fertile Mollisol. However, over time, crop rotations that use the right crops increase soil organic-matter concentrations and improve the inherent physical and chemical properties of the soil.

Soil maps are available from local USDA Natural Resources Conservation Service (NRCS) offices. Or, search the web for “Web Soil Survey” to find NRCS soil maps online. Check these maps to determine an area’s predominant soil type and its inherent soil characteristics. To determine the characteristics of a field’s soil, collect soil samples from the top four inches for no-till fields and other undisturbed landscapes. For conventional and reduced-tillage fields, take samples from the top six inches. Testing at these depths assesses the root zone nutrient concentrations and assists in developing a fertility-management plan.

Crop markets are well established throughout the country. Before including specialty crops in a rotation, identify the market for them. For instance, peanuts require special handling and belt-driven machinery for moving the pods from place to place without damage. Even though temperature, moisture and soils may be ideal for peanut production, if there is not a peanut-handling facility in the area, peanuts are not a viable crop option. Secure a market and buyer prior to introducing a new cash crop into the rotation.

Commodity price plays a major role in annual acreage shifts from one crop to another. World supply and demand principles directly affect the price. Prices change quickly due to new market demands, crop failures, bumper crops or other factors. When soybean prices are high, acreage is shifted to soybeans and less acreage is planted with other crops that have lower profit potential. Likewise, a corn-crop failure may prompt more corn acreage the following year since world supplies would be low and prices higher. Markets are also influenced by regional factors. For instance, a poultry or swine integrator may establish contracts for an alternative crop such as sorghum that has lower feed costs per unit than corn. Manage cash crop acreage for maximum profit potential, and adjust the rotation to meet the production characteristics of the cash crop.

Government programs continue to evolve with new programs being initiated while other programs are discontinued. There are many conservation-oriented programs that provide funding to defray the cost of implementing best management practices. Practices include certain conventional and conservation tillage practices, precision agriculture, and adding cover crops to rotations. The programs are managed through NRCS and local Soil and Water Conservation Districts. Additional programs managed by the USDA Farm Service Agency assist producers with operational loans, crop subsidy payments and energy programs. For more information, contact the local offices for these agencies.

Fertility, disease, weed, insect and irrigation management vary by crop as do production techniques for establishing and harvesting plants. Adding a crop to the rotation may require different equipment, implements, fertilizer, pesticides and timing of field operations. Personal preference determines whether these changes will be made.

Take for example adding a high-residue cover crop to a rotation. These cover crops add organic matter, improve nutrient cycling, improve fertility and prevent erosion. The benefits are maximized when the cover crop is not terminated until late in the season when crop biomass is greatest, such as at heading for cereal crops. However, introducing a new crop or crop management plan requires a change in the traditional timing of field operations such as terminating the cover crop and planting the subsequent crop. Fertilization timing and rates may also change to achieve maximum cover crop biomass. Different equipment is needed for rolling/crimping the cover crop, strip tillage or planting into residue. Producer experience with the different equipment and tasks is a factor. Ultimately, producer preference determines if the cover crop will be added and the necessary changes made.