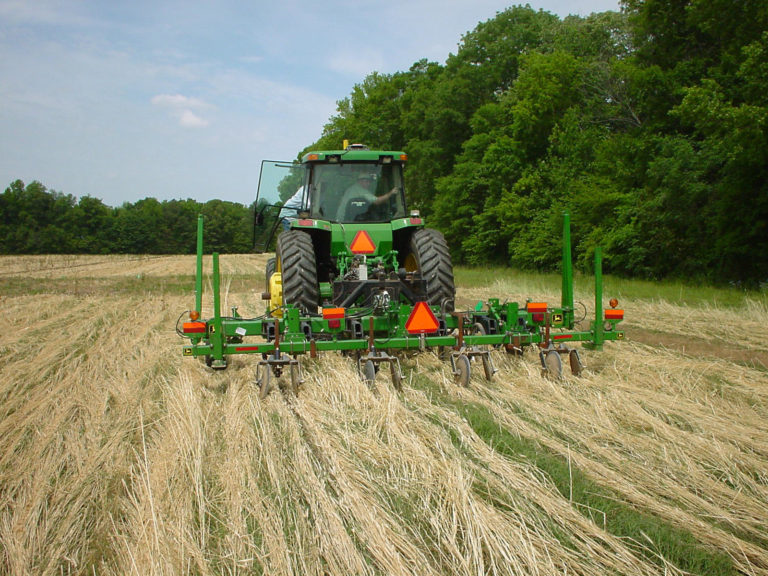 The longevity of in-row subsoiling effects on a loamy sand in South Carolina was studied by tilling down to depths of 20 to 24 inches [10]. One year after subsoiling, signs of the previous year’s tillage were evident, but the soil strength had increased to between 220–360 pounds per square inch (psi). This soil strength is considered limiting to root growth. Annual subsoiling of all agricultural soils in the southeastern Coastal Plain was and is still recommended.

In-row subsoiling on a loamy sand in South Carolina was studied for two years [9]. Three subsoilers were used: Brown-Harden Super Seeder (Ozark, Ala.), Tye paratill (currently manufactured by Bigham Brothers Inc., Lubbock, Texas) and Kelly Manufacturing Company subsoiler (KMC, Tifton, Ga.). Soil strength was evaluated with and without conventional disking. All three implements effectively disrupted compacted subsoil. Corn stand establishment was less (67 percent) when disking was not used than for the disked treatment (92 percent), though the reduced stand did not significantly affect yield. Since the study, stand establishment problems with reduced tillage have been eliminated with improved no-till or reduced-till planters and drills.

The use of a paratill, a type of in-row subsoiling implement, was evaluated on a clay soil in Georgia [13]. Grain sorghum was no-till planted into wheat residue each year of a three-year study. Six shanks with equal spacing of 24 inches were pulled approximately 12 inches deep during the fall after harvesting sorghum. The tillage treatment was evaluated for its effect when completed every year, every other year, or once every three years. Soil strength increased significantly in the 5.5–8.3 inch depth range as the frequency of paratill use decreased. This indicates that in this soil subsoiling may need to be performed on an annual basis, though yields among treatments were not significantly different.

The effect of in-row subsoiling was evaluated on a silt loam in northern Alabama, as well as on a sandy loam and a sandy-clay loam in central Alabama [17]. In-row subsoiling to a depth of 15 inches was conducted with a deep-fertilizer applicator [33]. For the sandy loam, a 22 percent increase in cotton yield occurred over all three years of the study when compared to treatments without subsoiling on the same soil type. For the other soil types, no significant yield benefit was found with in-row subsoiling.

A controlled-traffic system was used to evaluate the effect of fall in-row subsoiling in a Mississippi clay soil [28]. In-row subsoiling was conducted after harvest with a parabolic subsoiler to a depth of 15.7 inches on 20-inch centers. Cotton row spacing was 40 inches. With no irrigation, yield increases averaged 15 percent with in-row subsoiling. With irrigation, yield increases averaged 8 percent. Yield was probably higher in non-irrigated plots because subsoiling increased water availability. When soybeans were grown instead of cotton in this same experiment, yields in non-irrigated treatments were 73–132 percent higher in three out of four years when compared to non-irrigated treatments using a disk harrow followed by a disk cultivator [34].

The relationship between soil strength and cotton yield was studied in a controlled-traffic system on a loamy sand in South Carolina [8]. In-row subsoiling to a depth of 16 inches with a KMC subsoiler was compared to no in-row subsoiling on plots with no surface tillage and with surface tillage using a disk to 15-centimeter depths. Soil strength was reduced by subsoiling and coincided with increased root growth. However, subsoiling did not influence cotton yield so it may not be necessary on an annual basis for cotton grown in traditional wide-row management, meaning row spacing of 36 inches or more. The positive effects of a rye cover crop were also noted, although they did not increase yields. The positive effects included increased soil water content, reduced soil erosion, reduced leaching of nutrients and increased organic matter.

A study on an Alabama sandy loam measured the effect of five years of in-row subsoiling and controlled traffic [21]. One of the initial tillage treatments used a Deere & Co. (Moline, Ill.) V-frame subsoiler (Figure 6.1), operating on 10-inch centers, to completely disrupt the soil profile down to a depth of 20 inches. Another tillage treatment used a KMC in-row subsoiler to a depth of 16 inches prior to planting. Traffic was eliminated on half of the plots using an experimental wide-frame tractive vehicle that can span a distance of 20 feet. Results from this study showed that when in-row subsoiling was used on an annual basis, re-compaction caused by traffic did not affect crop yields (Figure 6.3). Root growth is restricted when soil strength is in the range of 290 psi or greater. The advantages normally attributed to controlled traffic did not materialize due to the annual disruption provided by in-row subsoiling. Another study that used the same tillage treatments concluded that when traffic was not controlled, the plots that received the initial complete disruption treatment with the V-frame subsoiler re-compacted to levels similar to plots that had never been subsoiled (Figure 6.4) [20]. This may be due to vehicle traffic exposing loosened soil to extreme forces causing additional compaction.

An experiment on an Alabama silt loam was conducted to compare in-row subsoiling with a paratill [26] to a depth of 18 inches and with a KMC subsoiler to a depth of 17 inches. Results from this experiment indicated that both forms of in-row subsoiling in the fall resulted in the highest seed cotton yields: 16 percent greater on average than conventional tillage and 10 percent greater on average than strict no-till. Both subsoiling treatments significantly reduced compaction, which contributed to the increased seed cotton yields.

Rainfall infiltration and runoff were evaluated on the same plots used for the study in the previous paragraph [30]. Fall and summer rainfall simulation experiments measured infiltration and runoff at the end of one and two hours of simulated rainfall. In-row subsoiling with the paratill influenced runoff and soil loss more than surface cover. The plots with no surface tillage, meaning no disking or chiseling, and an off-season rye cover crop had 3.4–10 times less runoff if they were paratilled (Figure 6.5). Similarly, conventional or clean-tilled plots had 1.5–5.4 times more soil loss than those that retained surface cover, even if they were subsoiled. A no-till system combined with the use of a paratill implement in the fall and a rye winter cover crop was recommended for the Tennessee Valley region as the best system to increase infiltration and plant-available water while reducing runoff and soil loss. 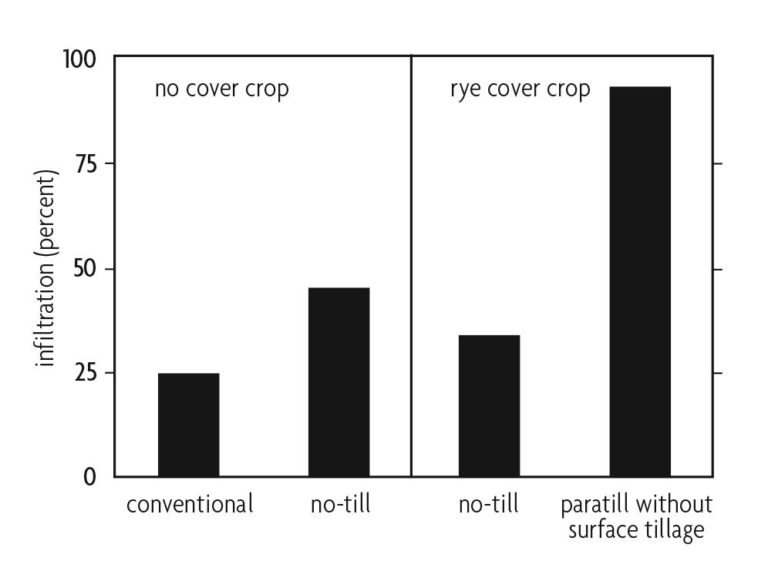 FIGURE 6.5. Percent infiltration measured during the second hour of simulated rainfall on an Alabama silt loam with and without cover crops [32].

One of the few studies involving in-row subsoiling in pastures evaluated the use of a paratill and an Aerway (Wylie, Texas) pasture renovator in Alabama on a sandy loam [27]. These methods of renovation tillage effectively loosened the compacted soil and caused an increase in dry matter production. The effects of each in-row subsoiling method were still evident after one year.

One of the major reasons to in-row subsoil is to extend rooting depth into the soil profile where additional soil moisture is readily available. However, if moisture is made available to the plants by other means such as irrigation or frequent rainfall, it is possible that subsoiling will have little effect. This hypothesis was verified in a study examining a Coastal Plains sandy loam [11]. The four-year experiment examined three crop rotations, two tillage treatments and three water-management treatments. The rotations were corn>corn, corn>soybean, and soybean>corn. The two tillage treatments were in-row subsoiling and no in-row subsoiling. The three water-management treatments were rainfed, irrigation, and irrigation with nitrogen fertilization via fertigation. For the irrigated treatments, corn yields were 8–135 percent greater than rainfed treatments all four years, and soybean yields were greater three of four years by 26–31 percent. In-row subsoiling increased corn yields only two out of the four years by 4–6 percent.