Fertility in the region relies on both conventional fertilizers and poultry litter. Due to the clayey texture of the soils, all of the fertilizer needed for a crop can be applied at or before planting. There is no need for split-applications of nitrogen, as is recommended with sandier soils. In conservation tillage systems, application of fertilizers on the soil surface can result in stratification of nutrients, meaning there are more nutrients in the surface soil than deeper in the soil profile. In the Southern Piedmont region, this has not proven to be a problem for supplying the nitrogen, phosphorus or potassium needed for plant growth. Starter fertilizers containing both nitrogen and phosphorus may be needed for corn in the early spring because of cooler soils under cover crop residues. Long-term use of conservation tillage and cover crops increases soil organic matter and nutrients, thus reducing the need for nitrogen on some crops [1].

Most soils in the region are highly eroded. This, together with many years of tillage, has resulted in mixing of the original topsoil with the underlying soil layer. In almost all cases the subsoil is finer in texture, commonly clay loam, clay, silt loam, silty-clay loam or silty clay. The current blended texture of the topsoil is often variable throughout a field because the side-slopes have suffered more erosion and mixing than the nearly level, upland areas. Soils with a finer surface texture are generally more crust-prone than the original sandier topsoil. Crusting can result in 50 percent or more of rainfall to be lost as runoff that causes soil erosion and environmental damage. The best defense against crusting is using cover crops. 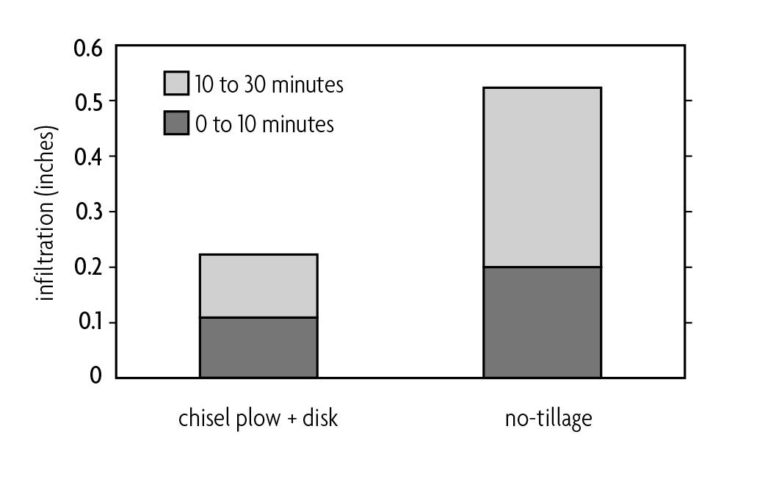 FIGURE 20.2. A comparison of rainfall infiltration under conventional tillage and under no-till. Rainfall was applied at 2 inches per hour for half an hour to simulate a summer rainstorm. Data provided by the Upper Piedmont Research Station in Reidsville, N.C.

For the more clayey-textured, sloping soils of the region, surface crusting can be reduced and water infiltration increased through surface residue management with continuous conservation tillage [7]. This will usually improve crop yields by reducing losses due to drought stress. An ongoing tillage study begun in 1984 in the North Carolina Piedmont demonstrated the benefits tillage can have on crop yields and water-use efficiency. Water was applied at 2 inches per hour for a half hour, which closely resembles common summer rainfall events. Infiltration in the no-till soil was more than double that of the soil that was annually chisel plowed and disked (Figure 20.2). The no-till soil surface was not only protected by corn residue from previous crops, but it also benefited from the effects of surface residues on soil organisms. The soil organisms influence soil physical properties, which results in increased aggregation, reduced surface soil crusting and faster rainfall infiltration. 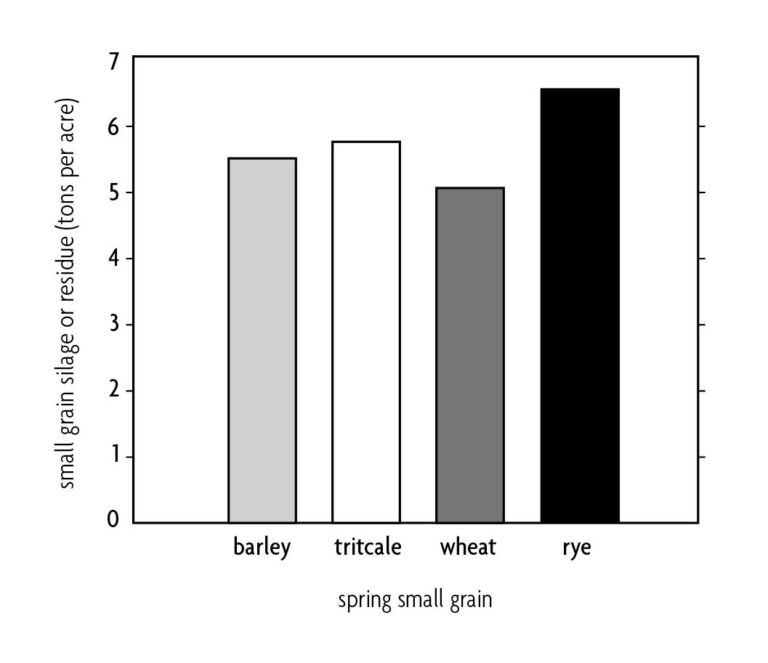 FIGURE 20.3. Small-grain biomass yields that are removed as spring silage or are left as residue for no-till corn. Data from Piedmont Research Station, Salisbury, N.C.

Leaving sufficient cover crop residues on soils is particularly important [3, 8, 9, 10]. An intensive cropping system that includes a winter annual cover crop followed by a summer crop that produces abundant residue is recommended. This results in a decomposing mulch on the soil surface at all times. Annual additions of 4.5–5 tons per acre of crop residue are typically needed [2, 4, 21, 22]. Barley, rye, triticale and wheat produce 5–6.5 tons of residues that can be either removed for silage or left for the following no-till corn crop (Figure 20.3). Removing small-grain residue can reduce yields. In a North Carolina no-till study, where the small-grain residues were removed, corn silage yields were reduced by 3.75–7.35 tons per acre (Figure 20.4). Economics favor leaving the small-grain residues in place because the value of small-grain silage is considerably less than the value of corn silage. 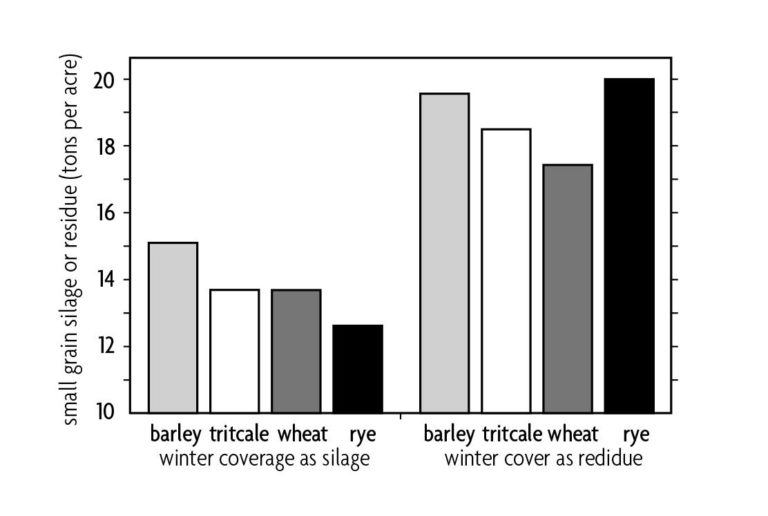 Cover crops and tillage also affect the need for subsoil management. Most of the subsoils in the region have a blocky structure that does not usually limit rooting depth. Cover crops and forages grow roots from late fall through spring when the soil is moist and less restrictive to root growth. As the roots mature and die, they leave organic matter that forms soil aggregates and pore spaces that enable future roots to exploit the soil volume more completely. Increasing the intensity of crop rooting in the subsoil increases the amount of water and nutrients available for crops. Improved yields, especially on eroded areas, also increase the amount of plant biomass returned to the soil, including root biomass. The key to successful crop production on Southern Piedmont soils is maintaining or increasing soil organic matter.

Researchers in North Carolina demonstrated the broad responsiveness of soils to long-term no-till in a survey of farm fields across the state [11]. In fields cropped to typical rotations of corn, cotton, peanuts, soybeans and small grains, three facts were confirmed:

Initial adoption of conservation tillage may require some type of subsoiling operation with a paratill (bent-leg) or rippers, along with strip-tillage. But subsoiling can be eliminated with proper management, including the use of cover crops to add organic matter to the soil [5, 13, 14, 15, 16]. A long-term study of grain sorghum grown on Cecil soil indicated yields were greater with in-row chiseling during the first four years but were greater with no-till the second four years [7]. A similar response was not seen for soybeans, due to weed and disease pressure, or for wheat, probably due to the extensive root system of wheat. In-row chisel plowing at planting results in greater cotton yields.

Variability of soil properties is common within Southern Piedmont fields. As a result, some areas need subsoil tillage while others do not. Newer technologies to map fields with GPS for yield and soil texture can be used to identify areas more likely to benefit from subsoil tillage. By identifying areas where subsoiling is not needed, these technologies reduce subsoiling costs. County-level soil maps available from the USDA Natural Resources Conservation Service can also help identify areas of fields needing special management. They include discussions of the textures typical of the surface and deeper horizons for soils in the county. Increasingly, new technologies help farmers predict and adjust to the variability that exists on their farms and to the changing demands of weather, markets and society.

Maintaining residue cover and adopting conservation tillage practices play an important role in maintaining or increasing yields (Table 20.1) [18]. Yield changes can occur in the first year, depending on such factors as soil characteristics, environmental conditions and the farmer’s management intensity and experience. Due to variability in soil properties, measurable changes in the soil physical and biological properties that underpin yield gains usually require three to five years to occur.