Table 16.2 summarizes several switchgrass production cost scenarios based on a five-year planning horizon and a 10-year planning horizon. The baseline scenarios look at the cost of production without replanting costs, storage costs, transportation costs and BCAP incentives. Then, these other cost components and incentives are included to determine their impact on the cost per dry ton of switchgrass. The remainder of this section reviews the methods used to simulate the yields and costs that resulted in Table 16.2. Tables 16.3 through 16.14 include detailed information about those costs.

The life of the stand determines the time over which start-up costs and maintenance costs must be recovered. [54]. Switchgrass has a potential stand life of 10 or more years from an agronomic and economic perspective [74]. However, several factors may dictate a shorter planning horizon in a developing switchgrass feedstock market [35]. First, improved varieties may be developed that result in a stand being killed before its potential life span. Improved varieties may have higher yields or traits geared toward producing more ethanol, such as maximizing the production of desired sugars. The potential for stand obsolescence may be a factor in determining contract length. Second, the length of the contract may be limited by land rental or lease arrangement. Finally, the anticipated capital requirement for a first-generation biorefinery is expected to be substantially greater than for an equivalent capacity corn ethanol plant [57]. Given the substantial startup costs of a biorefinery, investors will want long-term contracts in place that assure stability of feedstock supply. Feedstock represents about half of the anticipated operating expenses of the plant [5]. However, the length of the contract will likely be shorter and in the range of five to seven years [5]. Expectations about yields, costs and net returns are based on the length of the contract rather than potential stand life.

Given that the production costs vary with yields, stand life and contract length, yields and production costs were simulated for different stand lifespans on a common agricultural soil in East Tennessee. The soil, Dandridge, is shallow and excessively drained, and is frequently found on upland slopes that are not conducive to row cropping. Agricultural uses for this land include pasture and hay for beef cow-calf production.

ALMANAC, a crop simulation program [31], was used to simulate random switchgrass yields in a Dandridge soil. The model was adapted to Tennessee growing conditions using switchgrass yields during establishment and mature yields from a field experiment [45], and the knowledge and expertise of a soil scientist [66] and a crop simulation modeler [6]. Production inputs and machinery operations used in the crop simulation were from University of Tennessee enterprise budgets [24]. Historical rainfall and temperature averages for Knoxville, Tenn., from the National Oceanic and Atmospheric Administration were used to calibrate the model to east Tennessee weather conditions. Two scenarios were simulated: a five-year planning horizon and a 10-year planning horizon. The average switchgrass yields for each year of the two scenarios are presented in Figure 16.1. 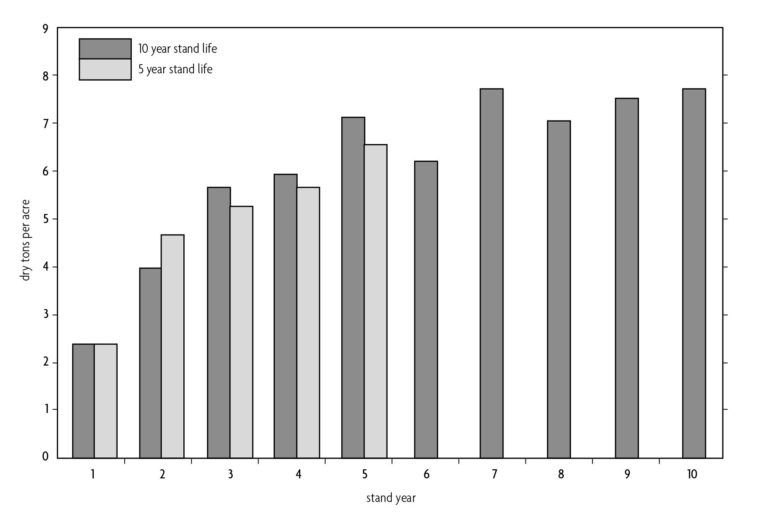 Annual land rental costs were assumed to be $22 per acre for hay and pastureland [2]. This is an opportunity cost for growing switchgrass. The operations schedule and the labor, materials, machinery operating and machinery ownership expenses for establishment, maintenance, harvest, handling, storage and transportation activities were estimated using budget parameters produced by The University of Tennessee Department of Agricultural and Resource Economics [24, 20, 36, 37, 45, 42]. The cost of labor was charged at 1.25 times the machine time for each equipment operation using a wage rate of $9.75 per hour, and diesel fuel for all equipment operations was expensed at a rate of $2.35 per gallon [42]. The capital recovery method was used to estimate depreciation and interest on equipment using a 3 percent real rate of interest [3]. A nominal interest rate of 6 percent was used to charge six-months interest on expendable materials and supplies used annually in the production process [42].

The simulated costs for switchgrass establishment are detailed in tables 16.3 through 16.6. The operations to establish the switchgrass in May at the beginning of year one of the simulation include one to two herbicide sprays to kill weeds before planting, sowing the switchgrass using a no-till drill, fertilizer application (only if soil is rated poor in phosphorus and potassium), three post-emergence sprays to control weeds and a pass with a rotary mower to clip weeds taller than the fledgling switchgrass stand.

The simulated annual maintenance costs for switchgrass are detailed in tables 16.7 through 16.10. Annual nitrogen fertilization was at the University of Tennessee Extension recommended rate of 60 pounds per acre [24] with a cost of $0.48 per pound [42]. University of Tennessee Extension does not recommend phosphorus or potassium fertilization if soil tests indicate medium or high levels of phosphorus and potassium. [24]. However, to account for the potential removal of these nutrients, it was assumed that phosphorous pentoxide (P2O5) and potassium oxide (K2O) were applied at University of Tennessee Extension recommended rates of 40 and 80 pounds per acre, respectively, in each year of the simulation. In addition, two spray operations to control weeds were assumed in year two of the simulation but not in subsequent years of the simulation.

The simulated costs for harvest, hauling and storage are detailed in tables 16.11 and 16.12. Tables 16.13 and 16.14 provide the annualized costs for operating, ownership and labor expenses associated with harvest based on five- and 10-year planning horizons. The operations schedule for harvest from November through February of each year of the simulation includes mowing, raking and baling; the movement of the bales from the field to the storage location; and the placement of bales into storage. Mowing and raking costs were assumed to remain constant on a per-acre basis for all yield levels in the simulation [45]. Machine, labor and twine for the baling and handling operations were assumed to be a function of switchgrass yield. To accomplish this, the capacity of the large-round baler was assumed to be 5.5 dry tons per hour, meaning one hour of machine time will result in a 5.5 dry-ton yield [45]. The rate at which bales are moved to the edge of the field for storage or transport to another storage location was assumed to be 8 dry tons per hour using a front-end loader with two bale spears to move two round bales per trip [45].

For this analysis, bales were assumed to be stored outdoors at the edge of the field. Because of abundant precipitation in the Southeast, it may be difficult at times to field-dry biomass below 20 percent moisture content [15]. Storing round bales outdoors in a single layer stack will facilitate further drying after harvest [15]. However, the cost of storing bales under protection is more expensive in a single-layer stack than in a multi-layer stack [26]. A storage stack in a 3-2-1 pyramid design with three bales in the bottom row, two in the middle row and one in the top row, and covered by a protective tarp has also been recommended as a method to protect against dry-matter losses in the Southeast [11]. Thus, the cost of a 25-bale, single-row stack where round bales are placed end-to-end and the cost of a 72-bale, 3-2-1 pyramid stack of round bales were simulated to evaluate the effects of storage method on production costs. It was assumed that bales were placed on wooden pallets and covered with reinforced plastic tarps for both storage options.

Annualized costs for materials, labor and equipment to build the stack were estimated using assumptions reported in English et al. [20] and were $14.64 and $8.79 per dry ton going into storage, respectively, for the single-row and 3-2-1 pyramid stacks. An average weight of 816 pounds of dry matter for a 5-foot-by-4-foot round bale going into storage was used to calculate tonnage and the cost per dry ton for each storage option [20]. Materials used to build the stack were amortized over an expected five-year useful life with zero salvage value. Tractor and labor time to haul 8 dry tons per hour to the edge of the field [45] was increased by an extra 10 percent to account for additional tractor and operator time to place the pallets as the stacks are being built. Storage dry-matter losses for large round bales stored under a reinforced plastic tarp were estimated using the dry-matter loss as a function of days in storage relationship estimated by Larson et al. [38]. Transportation costs for moving the feedstock from storage to the biorefinery was assumed to be $11.95 per dry ton with a 2 percent dry-matter loss during trucking [38].

Table 16.2 shows the simulated production costs and yields for five- and 10-year planning horizons. The prices of all production inputs were assumed to be constant in the five- and 10-year simulations. Annual cash flows were discounted to present value using a 10 percent discount rate [54]. The baseline scenario in Table 16.2 is the simulation of the costs of establishment, maintenance, harvest and handling of switchgrass before being placed into storage at the edge of the field. The simulated impact of replanting on this cost is the second scenario in Table 16.2. A 20 percent probability of replanting was used for estimating the impacts on the cost of production [24].

Given that the biorefinery will be a startup operation that will require a steady supply of biomass once operational, the third scenario assumes that switchgrass is planted four years before the biorefinery starts processing biomass. Planting four years in advance of the plant opening allows the switchgrass stand to reach full-yield potential and builds an inventory of biomass to ensure a steady supply for the biorefinery. Thus, it was assumed that biomass was delivered to the biorefinery starting in the fourth year. Switchgrass from the first, second and third years of production were assumed to be stored an average of 3.5 years (1,277 days), 2.5 years (913 days) and 1.5 years (548 days), respectively. Starting in year four, the biomass was assumed to be stored an average of six months (183 days) before delivery to the biorefinery.

Two BCAP incentive-payment scenarios are included in Table 16.2. For the first scenario, the establishment incentive was included. Total budgeted machinery, materials and labor costs for establishment were reduced by 75 percent. For the second scenario, both the establishment and harvest incentive payments were included. The estimated on-farm harvest, handling and storage costs were reduced by a maximum of $45 per dry ton in the simulation. If harvest, handling, storage and transportation costs were less than $45 per dry ton, the lower cost was used to calculate the amount of the cost reduction with the incentive.

Cost of Production Results and Analysis

Third, the costs of feedstock delivered to the biorefinery that considers storage and transportation expenses under the biorefinery startup scenario were about 1.6–1.8 times greater than the costs of storage-bound feedstock placed at the edge of the field. The average cost of feedstock stored in a single-row stack and delivered to the biorefinery was $124 per dry ton under the five-year planning horizon and $100 per dry ton under the 10-year planning horizon. By comparison, storing feedstock in a 3-2-1 pyramid reduced those delivered costs by 10 percent ($13 per dry ton) for the five-year horizon and 10 percent ($10 per dry ton) for the ten-year horizon. Contributing to the high delivered costs were the average holding times of inventory of 1.5–3.5 years during the startup phase. In addition, biomass inventory stored before delivery in year four of the simulation incurred an average 14 percent storage matter loss. By comparison, biomass stored for an average of six months in years four through 10 incurred a storage dry matter loss of 5 percent. These two factors explained the large increase in production costs from the time the feedstock went into storage to the time it was delivered to the biorefinery.

Results indicate that the costs of storage for switchgrass produced using traditional hay harvesting and storage methods may be a major barrier for establishing the feedstock production base in a biorefinery startup. It also should be noted that the estimated costs of storage and transportation of feedstock to the biorefinery in this analysis do not include insurance on the feedstock for fire or other perils, or an explicit charge for the land area used for storage.