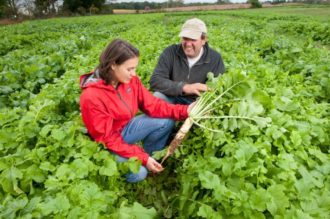 Natalie Lounsbury, of UMD, and Jack Gurley, of Calvert's Gift Farm, with an August-planted cover crop of tillage radish at the Central Maryland Research and Education Center in Clarksville.

Vegetable farmers who want the myriad benefits of winter cover crops may be setting themselves up for a hectic spring schedule, when the challenge of planting during a narrow window of good weather becomes more complicated by the need to first terminate that winter crop.

To make their lives a little easier, University of Maryland (UMD) researchers are exploring the benefits of forage radish, a relatively new cover crop species that they have found fits well with no-till spring planting, and boosts farmers’ yields and profits.

In a SARE-funded trial in 2012, an early-season, organic spinach crop planted after forage radish yielded 17,000 pounds per acre—worth $34,000 at a conservative $2 per pound. The spinach was raised without tillage, fertilizers or herbicides. “Not a whole lot of work,” says UMD soil scientist Ray Weil, who conducted this research with UMD graduate student Natalie Lounsbury. “I don’t usually think of silver bullets, but for planting early spinach I think we have one.”

Forage radish shows particular promise for organic farmers as an alternative to tillage, a time-consuming process used to control weeds, loosen compacted soil and prepare beds prior to planting. When seeded in August in the mid-Atlantic, forage radish suppresses winter weeds because of its quick growth and broad leaves. Its large taproot loosens the soil and helps the plant capture excess nutrients from deep in the ground, which keeps them from leaching into waterways and makes them available to spring crops when the radish decomposes.

“Right now, forage radish seems to be the only cover crop that does all these things we need it to do,” Lounsbury says.

One of forage radish’s main advantages over other popular cover crop species is that it dies in winter and leaves little residue in spring. This gives the soil a chance to dry out and warm up, two conditions that are essential for timely planting and successful germination of cash crop seeds. This played a major role in the UMD team’s positive results.

Dave Liker was one of a handful of farmers who collaborated with Lounsbury and Weil on their SARE project. A diversified organic farmer on 25 acres in Laurel, Md., Liker typically relies on spring tillage to manage his heavy, wet soils, and he has difficulty with high-biomass cover crops like rye and vetch because of the time it takes to terminate them. “Cover cropping is really difficult to manage organically,” he says. “The following season, when we need to work the ground, we need to work the ground.”

But when Liker tried a forage radish cover crop before a spring crop of no-till peas, he was happy with the result. “It was the best crop of peas I’ve ever had,” he says.

While forage radish is proving its value, Lounsbury cautions that it is not a cure-all. To avoid pest problems, farmers should not include it too frequently in rotations with other brassicas. Also, they need to pay attention to fertility before seeding forage radish.

“There is amazing weed suppression if you get a good cover crop stand, but if you don’t have enough fertility when you plant in August, then you’re not going to get a good stand,” she says.