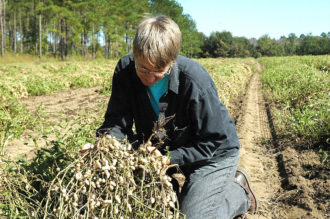 Relinda Walker overcame weed and disease pressures to produce Georgia's first ever organic peanut crop in 2007. Walker is working with researchers to identify strategies for successfully growing peanuts organically in the South.

In 2007, Georgia organic grower Relinda Walker produced a historic crop of peanuts. The bounty—6,000 pounds grown on two acres—was significant because it represented the first crop of certified organic peanuts raised in the Southeast. Even though the Southeast produces 79 percent of the country’s peanuts, more than 99 percent of organic varieties are raised in Southwestern states.

Recognizing that Southeastern growers are missing out on a lucrative market, Mark Boudreau of Hebert Green Agroecology in Asheville, N.C., assembled a team of researchers and growers, including Walker, to focus on carving out an organic peanut industry for the region.

“The demand is high, and the price is premium,” says Boudreau, whose work has been funded by two SARE grants. “Most processers pay twice as much for organic peanuts, and I’ve seen it as high as five times as much.”

Since beginning their multi-state research in 2005, the team has made important strides toward overcoming the weed, disease and insect problems associated with organic peanuts. They are problems farmers do not generally face in the Southwest, where the climate is drier.

In its first three years of trials, the group found it could significantly reduce insect problems and post-emergence diseases. But weeds, seed rot and poor stand development have emerged as persistent problems, according to Boudreau. They are caused primarily by the region’s wet growing conditions, a short planting window and a lack of the right seeds. “If your peanuts aren’t up and running quickly, then they aren’t going to compete with the weeds,” he says.

Boudreau’s team is now focused on determining what organic seed treatments and planting conditions are ideal for rapid early growth and stand establishment, as well as outlining successful weed management strategies. The team includes agronomists, plant pathologists, weed scientists and others based in Georgia, North Carolina and South Carolina.

Along with building up a strong stand, cultivating with a tine weeder is emerging as the best weed-control strategy, according to Carroll Johnson, a USDA Agricultural Research Service weed scientist involved with the project.

Another major hurdle involves the lack of regional infrastructure to handle a large organic crop. For example, there are no organic peanut shellers in the Southeast.

When enough conventional and smallscale growers begin to appreciate the economic value of a local organic industry, then many infrastructure issues will get resolved, says Carroll. “I think there’s a lot interest in this. I think a lot of farmers want this to work.”

Boudreau admits that establishing an organic peanut industry in the Southeast will take more time, but he feels growers and researchers are on the right track. “We have a lot of information we can give farmers about what the problems are going to be and the best ways of tackling them.”