It is well known that promoting biodiversity and building habitat for natural enemies are two strategies that can lead to reduced pest populations. Plant diversity on the farm can be increased in many ways, as described throughout this book. Specific pest problems can be addressed in part by adding specific plants to the farm system, or by building and maintaining habitat on the farm that attracts and retains beneficial insects and pollinators, or by a combination of both strategies. In addition to habitat around crop fields, within-field polycultures or intercropping systems show great promise across a broad spectrum of food and fiber crops.

Many recent studies demonstrate the positive impacts of plant diversification on populations of beneficial insects in agricultural systems. Some of those results are synthesized here and in Table 6.

There are two theoretical explanations for why insect pest populations are lower in diverse cropping systems than in monocultures. The resource concentration hypothesis contends that plant diversity makes it more difficult for insect pests to find their preferred host plant. This is particularly true for specialized feeders. Many pests find their preferred host plants through visual cues and by detecting plant odors, which is more difficult in a diverse system. In short, the pest is confused or distracted by the abundance of non-host plants and is less likely to find its way to the host plant. Conversely, in a monoculture, certain pest populations tend to be higher because their food resource—the cash crop—is abundant and easy to find. 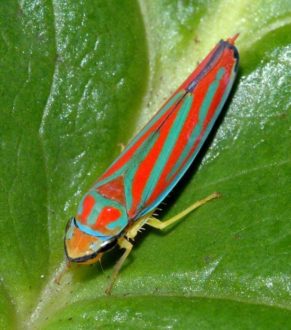 The leafhoppers (Cicadellidae family) are common and damaging pests of many crops and can transmit virus diseases. Table 6 includes crops that can be planted to manage these leafhoppers. (Photograph by Susan Ellis, Bugwood.org #1366056)

Several literature reviews and research studies provide greater detail and evidence for the benefits of intercropping and maintaining habitat for beneficial insects (see Key References). Taken together, this body of research goes a long way toward explaining the underlying mechanisms of these two theories and how they can be used to establish the kind of diversity needed to manage pests while maintaining crop yield.

Risch et al. (1983) examined 150 published studies assessing the resource concentration hypothesis. A total of 198 insect pest species were included in these studies, which demonstrated that 53 percent of the pests were less abundant in the more diversified system, 18 percent were more abundant in the diversified system, 9 percent showed no difference, and 20 percent showed a variable response. Plant species that were found to reduce insect pest pressure significantly are listed in Table 6. In a recent review, Poveda et al. (2008) found that plant diversification strategies tested over the last decade serve to reduce insect pest densities in approximately half of the cases.

Nineteen studies that tested the natural enemies hypothesis were reviewed by Russell (1989), who found that mortality rates from predators and parasitoids in diverse systems were higher in nine, lower in two, unchanged in three and variable in five of the studies. Russell concluded that the natural enemies hypothesis is an operational mechanism, but he considered the two hypotheses complementary. In studies of crop/weed systems, Baliddawa (1985) found that 56 percent of pest reductions in weedy, diversified cropping systems were caused by natural enemies.

The latest review of the subject was by Letourneau et al. (2011), who used meta-analysis on 552 experiments in 45 articles published over the last 10 years to test if plant diversification reduces insect pests and/or increases their natural enemies. The authors found extensive support for intercropping, the inclusion of flowering plants and the use of plants that repel pests or draw them away from the crop. Overall, crop diversification led to better pest suppression, more natural enemies and less crop damage than systems with less or no diversification.

While these two hypotheses seek to explain why diversification is an effective ecological pest management strategy, they do not point to different sets of strategies or approaches. In fact, they can be viewed as complementary ideas that together explain what is happening in a diverse cropping system.