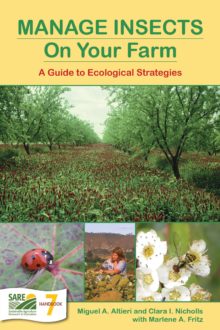 Adapted from Nicholls and Altieri (2013) Native pollinators, such as sweat bees, can be significant pollinators as long as sufficient habitat and nourishment are available. (Photograph by Joseph Berger, Bugwood.org #5370386)

In addition to managing pests and diseases, some beneficial insects play a major role in crop pollination. These pollinators contribute to the productivity of more than a hundred crops grown for food in the United States. According to the Xerces Society for Invertebrate Conservation and Cornell University research, wild bees conservatively contribute to at least 15 percent of the value of insect-pollinated crops. Bees, butterflies, beetles, moths, wasps and flies are among the beneficial insects that act as pollinators.

Unfortunately, many modern agricultural practices make farmland a poor habitat for wild bees and other pollinators. Monoculture systems sacrifice floral diversity and, consequently, diversity of pollinating insects. Agricultural intensification—characterized by large-scale, weed-free monocultures and the loss of non-cultivated land—deprives wild pollinators of habitat and contributes to the decline and fragmentation of their populations. Without pollen and nectar resources and nesting habitat, both the abundance and diversity of pollinating insects are quickly eliminated from the landscape. Pesticide use and the spread of non-native insect diseases also threaten pollinator populations around the world.

Research results increasingly show that the restoration of plant biodiversity within and around crop fields can improve habitat for managed and wild bees as well as other insects, and thus enhance pollination services. A diverse habitat is equally conducive to attracting and maintaining populations of the beneficial predators and parasitoids that are the main subject of this book.

Because wild pollinators generally cannot be artificially introduced to agricultural systems in adequate numbers, success is more likely if you manage your farm to attract them.

The following strategies help promote plant diversity on your farm or ranch, which in turn supports healthy populations of wild pollinators (Figure 3): Maintain uncultivated land along field margins.  Research has shown that the number of bumble bees on farms increases with proximity to natural habitat. Crops surrounded by uncultivated land have significantly more bees than cultivated fields surrounded by simple habitats, such as monocultures. Create hedgerow habitat composed of native and flowering plants along the margins of cultivated fields to provide diverse floral resources and nesting sites for wild bees. These hedgerows can also serve as corridors that bring pollinators from natural areas to farm fields.

Any amount of habitat, as long as it is protected from insecticides, can enhance wild bee numbers to the point that they can significantly contribute to crop pollination.

The Xerces Society promotes the use of bee pastures, or land managed for plants that maximize bee reproduction. An effective bee pasture must provide blooming plants throughout the nesting period (early spring through late fall) and typically consists of high-density wildflower meadows with a diversity of plant species. Ideally created with native wildflowers, bee pastures that include both native and non-native (but non-invasive) species will work. Examples of non-native species with prolific blooms include buckwheat, alfalfa, and various clovers and vetches. Note that non-native plant species are most attractive to already common, generalist wild pollinators, while native plants support a greater diversity of pollinator species.

While additional research is still being conducted on the amount of habitat needed to support wild pollinators for different crop systems, initial findings suggest that if 20 to 30 percent of the surrounding landscape within a mile of the farm is maintained as permanent pollen and nectar-rich habitat, many types of crops can get their pollination needs met from the wild bees sustained by that habitat. This eliminates the need for managed honey bees as crop pollinators. Even where it is not possible to maintain pollinator habitat at this scale, any amount of habitat, as long as it is protected from insecticides, can enhance wild bee numbers to the point that they can significantly contribute to crop pollination. Habitat of any size can also increase the role of specialist pollinators such as bumble bees, which pollinate certain crops like tomatoes and blueberries more effectively than honey bees. Insectaries provide a source of food and habitat, specifically designed for beneficial and pollinating insects. (Photograph courtesy of Jerry DeWitt.)

Manage wildflower growth within fields and field borders. When establishing pollinator habitat in landscapes surrounding crop fields, select plants that bloom before and after the cash crop flowers. Also, avoid plants that might become hosts for harmful pests, as well as those that are likely to compete with the principal crop. Species that can be used include stinging nettle, buckwheat, poppy and many ragweed species, and flowering weeds in the Umbelliferae and Compositae families. It is now possible to buy seed mixtures that can be planted around fields to attract bees and other pollinators, or you can create your own mix.

In orchards, the biggest challenge is to identify a mixture of flowering groundcover species that encourages bees but does not compete with the fruit crop. Species that produce an abundance of nectar and pollen, yet flower before and after the fruit crops, will help sustain wild bee populations. Look for a perennial cover crop that would permit ground-nesting bees to establish in the orchard. Plants such as red and white clover, various vetches, yarrow and other low-cost, weedy wildflowers can create a diverse, low-growing understory in orchards.

Avoid plants that might become hosts for harmful pests, as well as those that are likely to compete with the principal crop.

To encourage the growth of pollinator habitat, avoid excessive tillage and herbicide applications—or time the applications carefully—because both practices can eliminate or reduce numbers of pollinators attracted by wildflowers before, during and after the main crop blooms.

Along with enhancing non-crop areas by seeding pollinator plants, much evidence suggests that tolerating agronomically acceptable thresholds of specific weeds, or non-crop flowering plants, already present in and around crop fields improves the abundance and diversity of beneficial insects, including pollinators. Species that can be tolerated include stinging nettle, buckwheat, California poppy, many ragweed species and flowering weeds in the Umbelliferae and Compositae families.

Since 2008, the USDA Natural Resources Conservation Service (NRCS) has off ed financial and technical assistance to eligible farmers for the creation of flowering hedgerows and wildflower meadows that support wild bees. In some cases the financial assistance can significantly offset the costs of installing such habitat. To find out if you qualify, and to learn more about how to design pollinator habitat features for your farm, contact your local NRCS service center. For more information on financial and technical assistance from the NRCS, see www.nrcs.usda.gov. Flowering plants are seeded on the edges of the crop field to attract beneficial insects and pollinators. (Photograph courtesy of Judy Brossy.)

Choose the right plants to maximize pollinator diversity.  To attract a variety of pollinators throughout the year, create landscapes where 15 or more flowering plant species are present, since different types of bees have different flower preferences. Since the most obvious need of pollinators is a diversity of nectar and pollen sources, consider the following when choosing plants for the farm:

Sustain bee populations year-round.  Bees and other pollinators need a season-long food supply; this is especially critical early and late in the year. Wild bees remain dormant throughout the winter and often need immediate food sources upon emergence in the spring. Bees that over-winter as adults, for example bumble bees, often need late-season nectar sources to build up their energy reserves for the long winter. Similarly, honey bees spend winter inside the hive living off honey from nectar they collected over the summer months. Without enough honey, honey bees can starve over the winter, resulting in the entire hive dying off.

Large monocultures of bee-pollinated crops like almond, canola or watermelon may provide a few weeks of abundant food, but a lack of wild plants in fields or adjacent areas blooming before and after the main crop can result in a decline of healthy pollinator numbers. Encourage blooming weeds or establish diverse plantings within and adjacent to crop fields to provide the floral diversity that will support resident pollinators year-round.

Wooded areas on the field margins and diverse crop plantings, such as the strips of crops and cover crops pictured here, will attract wild pollinators. (Photograph courtesy of Mandy Rodrigues.)

Include flowering crops in your crop rotation.   Many legumes used as green manure or cover crops in rotations serve as a food source for pollinators before, and occasionally after, the main crop has been planted or harvested. Beyond their capacity to attract pollinators, such legume crops help manage soil nutrients, prevent erosion, maintain soil moisture and control weeds. Some cover crops that are especially attractive to bees include vetch and clover, and non-legumes such as scorpion weed and buckwheat. Flowering cash crops such as canola also help attract and sustain pollinators. In addition to improving soil quality and attracting wild pollinators, flowering crops support beneficial predatory insects that also use the flowers as a food source, such as long-tongued flies (Syrphid and Bombyliidae families). Intercropping systems attract a diversity of pollinator species.  Flowering plants grown next to the primary crop encourage pollinators, including hoverflies, which are key aphid predators at the larval stage and are pollinators as adults. Intercropping systems that include a tall and a short crop, such as corn and bean polycultures, provide an ideal microclimate for pollinating insects, and allow them to move between plants more effectively. Another strategy is to include strips of pollinator-attracting plants within fields (for examples, see Create corridors for natural enemies).

Areas with poor soils may be the best sites for ground-nesting bees. The edges and corners of irrigated fields are also good sites.

Provide nesting locations. Since the majority of wild bees nest in the ground, avoid farming practices that inhibit or destroy nests, such as the widespread use of plastic mulch and extensive tillage. Farms that feature a variety of landscapes, including patches of bare soil, piles or hedges of stone, and clump-forming grasses, can provide ample nesting habitat. Some of the best places around the farm for wild pollinators may be the worst places to grow crops. Areas with poor soils may be the best sites for ground-nesting bees. The edges and corners of irrigated fields are also good sites to plant various pollinator-friendly plants.

In conclusion, there are many ways to manage your farm system to attract and retain the pollinators that are critical for many food-producing crops. Some of the same strategies apply whether you are looking to attract pollinators or you want to manage insect pests by attracting the beneficial insects addressed throughout this book. As with all new practices, start with small steps and evaluate the results as you go.