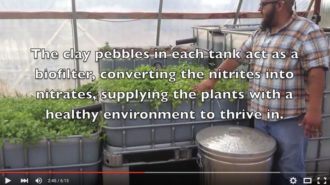 Cochise County, Arizona, where Aaron Cardona’s Arevalos Farm is located, is classified by the USDA as a food desert with high poverty rates, as well as high rates of diabetes and obesity. To help confront these problems, Cardona decided to look into aquaponics, which had not been experimented with in the desert regions of the Southwest or in areas with low-income populations. He designed his Western SARE Farmer/Rancher project, “Integrating Traditional Foods with Aquaponics in the Desert Southwest (project number FW13-142)” to research building a more affordable aquaponic system on his farm, which could be replicated by others in the region, creating an economic opportunity. The system would also produce culturally relevant food as a means of bringing back traditional foods into the local population’s diet; thus, improving the health of the community.

Searching for a Solution

Through the life of the project, Cardona looked to build a more economically viable aquaponic system for people of low income and integrate two traditional greens, verdolagas (purslane) and berros (watercress) with tilapia, while cooling the greenhouse from the harsh Arizona sun solar power. His objectives were:

Cardona claims the project has proved to be a success, stating “knowledge of fish grown in a greenhouse has spread far and wide, bringing many to come and ask how to set up their own system. By fulfilling one of the project goals of constructing an aquaponics system for half of the cost of a pre-manufactured system, it is now more accessible to a wider range of people of different backgrounds and income.”

Purslane did not develop in the system but watercress was a success. Due to the publicity of the project and availability of watercress, Cardona estimates that nearly 40% of his sales at the farmers’ market were to people of Hispanic descent, typically a much lower percentage of farmers’ market customers. He believes that integrating more traditional foods can increase the participation of the Hispanic community at farmers’ markets.

As far as the fresh water tilapia, Cardona says “it’s virtually an unexplored world with colossal potential. Although my fish are barely getting to the point to eat, I have been approached by many at farmers markets asking to buy them and was sought out by a popular four-star restaurant salivating over the potential to serve locally grown tilapia.”