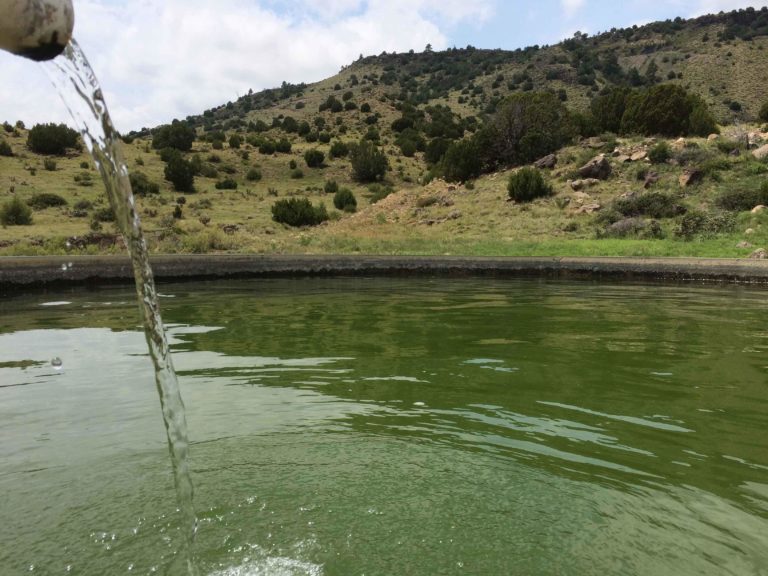 Julia Davis Stafford and her family added this water tank to their New Mexico ranch as part of the infrastructure that supports their rotational grazing plan. Photo by Laura Lengnick.

More frequent and extreme events are already presenting hazards to critical infrastructure needed in agriculture, including roads, buildings used for production and processing, storage structures for feed, forage and farm equipment, and power and water resources. As a result, farmers and ranchers are making numerous adjustments in their physical resources: the materials, tools, equipment, technologies and infrastructure they use to manage their production system. They are purchasing, upgrading or adding equipment, irrigation, drainage, physical protection, heating and cooling systems, and emergency backup systems. Physical resources such as hoop houses, irrigation and drainage, pesticides and other pest control materials, and genetically engineered drought-resistant crops can provide targeted protection against specific climate exposures. They also help capture new opportunities associated with a changing climate.

Changes or improvements to physical resources are particularly common as a response to greater variability in precipitation patterns. For example, many producers who are increasingly challenged by more variable and shorter windows in which to complete fieldwork have responded by purchasing larger equipment or additional equipment (tractors and associated implements) to reduce the time needed to complete fieldwork and increase management flexibility. In addition, many farmers in the Midwest and Northeast are adding or upgrading infrastructure such as irrigation and drainage systems to cope with more frequent and intense drought and flooding rains.

In response to the 2011–2012 drought and increasing urban demand for water, the Monroes, who farm near Denver, switched their entire farm from furrow irrigation to much more efficient drip and pivot systems. “We want to make sure we can continue to grow vegetables, and the pivot and drip irrigation puts the exact amount of water throughout the whole entire system,” Jacquie Monroe said. 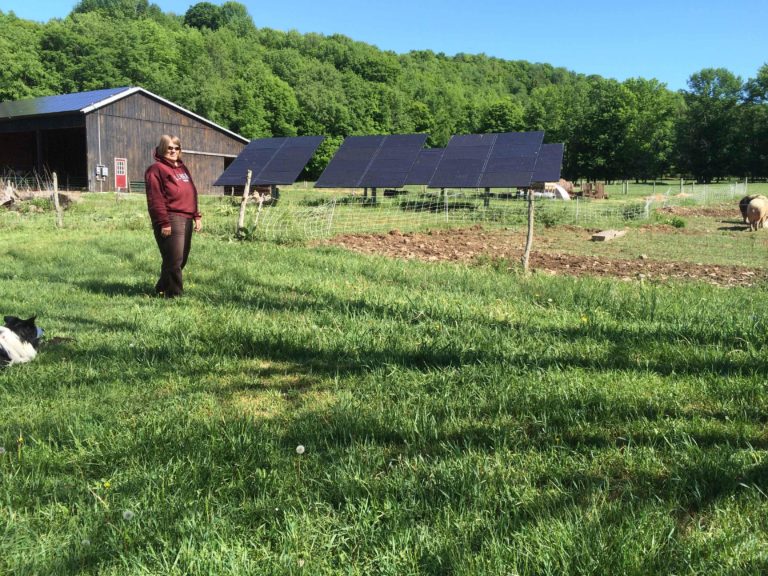 Adele Hayes stands in front of the solar panels she and her husband, Jim, installed at Sap Bush Hollow Farm, which help them cope with power disruptions caused by severe weather. In the background is the raised barn that ensures lambing can proceed regardless of weather conditions. Photo by Laura Lengnick.

On his 95-acre vegetable farm in Hustontown, Penn., Jim Crawford uses black plastic mulch as physical protection against more variable weather and extremes. This allows Crawford to catch favorable conditions for field preparation any time that they occur during the year. “What we have done now for six or eight years is to prepare beds and put plastic down on large acreage before we need it. That way the land is standing by and it’s ready when we need it,” he said.

With this soil protection, plus the use of hoop houses for additional environmental control in the spring and fall, Crawford has been able to significantly extend his harvests. “We have actually doubled the number of weeks that we harvest sweet corn and more than tripled the weeks of green beans,” he said.

Along with all the challenges posed by the changing climate, Hayes has also found new opportunity in the adaptations he has made. The new barn means he can shift lambing season from May to April, which ultimately represents a cut in costs. If April weather is cold and wet, his sheep can lamb in the barn; if it is dry and warm, they can lamb in the open as they used to do in May. Earlier lambing gives the lambs more time to grow and mature during the best part of the grazing season. “We’re looking at a longer grazing season, and we’re stockpiling more for winter grazing,” Hayes said. “The difference between winter grazing versus purchasing hay is almost a factor of 10, as far as cost. We hope to get a higher percentage of our animals finished before the grazing season ends, and it looks like we may be able to finish an additional batch of chickens each year as well.”