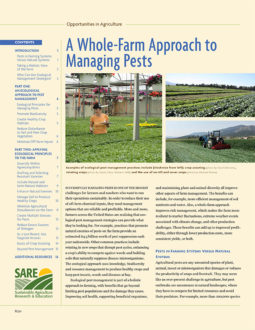 Some vegetable crops, such as tomatoes, peppers and squashes, have varieties that are genetically resistant to common crop diseases like blights and mildews. Choosing a variety that is resistant to diseases typical of your area is a proactive and relatively simple step you can take to greatly reduce the severity of crop damage from diseases and insects. But it is unlikely to eliminate problems in the long term. Pest outbreaks can still occur in spite of having planted resistant varieties if environmental conditions or poor crop management decisions create the conditions that are ideal for them. Also, repeated use of the same resistant crop variety in a field can encourage more aggressive pathogens that are unaffected by the resistance to thrive. Therefore, you should use resistant varieties in combination with other disease management strategies, such as crop scouting, equipment sanitation and crop rotation. Disease-resistant varieties can have flavor or yield characteristics that are different from available varieties, and these factors should be taken into account.

Grafting is an increasingly popular way to gain the benefit of disease resistance without sacrificing a crop’s desirable characteristics. Grafting is especially useful for organic producers, whose disease management options are more limited, and for growers of heirloom crops, as those crops often lack adequate disease resistance. Because grafting is time consuming, you should reserve it for high-value crops such as tomatoes, peppers and melons. The SARE fact sheet Tomato Grafting for Disease Resistance and Increased Productivity describes the grafting process in detail and presents information on the relative resistance of popular tomato varieties to common diseases.

Seeking new ways to help farmers manage soil-borne diseases and increase their winter sales, Oregon State University researchers used two SARE grants to explore the potential of different winter squash varieties (SW15-021 and OW16-008). They looked at everything from disease management to storage and marketability. In one project, the team shared integrated disease management strategies with Willamette Valley farmers, including fungal disease symptoms and scouting, crop rotation, fungicide treatments and the use of disease-resistant varieties. In the other project, they used on-farm trials to assess the profitability of different squash varieties, worked with chefs to assess characteristics such as flavor, and created marketing materials for the best-performing varieties. Dozens of farmers in the area adopted new practices as a result of this work.

A University of Florida horticulture scientist worked with Frog Song Organics in Hawthorne, Fla., to assess the performance and economics of grafted heirloom tomato varieties in an organic high tunnel system (OS13-083). In the SARE-funded project conducted from 2013 to 2017, the team grafted four heirloom varieties (the “scions”) onto two commercial rootstocks and compared them to the heirloom varieties with no grafting. They found that grafting was effective at managing Fusarium wilt and resulted in healthier, higher-yielding crops overall. In spite of the higher cost of grafting, some scion-rootstock combinations increased revenue 4.5 times due to improved yields.