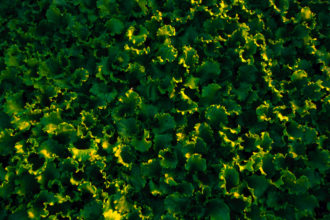 Pest managers are familiar with the concept of using degree days to predict pest outbreaks. Insects, like many other organisms, develop according to the temperature around them and degree days are a way to measure accumulated temperature.

Plants – at least in part – also develop based on temperature, so a team in Oregon is adapting a degree-day modeling system built for pest management to make a tool for vegetable growers to better plan their planting and harvesting dates.

“The problem is when you’re trying to schedule a harvest, seed catalogs all give an expected maturity date in calendar days,” explained Oregon State University Small Farms Extension Agent Nick Andrews, who is spearheading the project. “Calendar days are pretty inaccurate, and growers recognize that.”

One seed catalog for example might say a broccoli variety needs 65 days to mature, while another claims the same variety requires 90 days. That range makes it tough to pick a planting day in May to hit a desired harvest date in August. And using calendar days ignores local temperature, which is a huge factor in how fast plants mature.

“Lots of things influence vegetable development rates so degree-day models aren’t perfect,”Andrews said. “But they seem to be more accurate than calendar days, and degree-day models are especially useful when crops are planted early or late, or when the weather is unusual.”

With a $203,000 grant from the Western Sustainable Agriculture Research and Education program – Western SARE – the Oregon team created a website called Croptimeto predict the time-to-maturity for a number of vegetable varieties important to Willamette Valley growers. Croptime was built on the backbone of the USPest.org pest-management degree-day modeling site, which was itself supported by another U.S. Department of Agriculture regional program, the Western Integrated Pest Management Center.

The combination is not a stretch, explained Len Coop, the associate director of the Integrated Plant Protection Center at Oregon State and architect of USPest.

“Temperature integrates everything. It drives the development of everything,” said Coop, who is a contributor to the new project. “It was never a foreign idea to merge crop models with degree-day models.”

Here’s why it matters. For fresh vegetable growers, harvest timing is critical. Processors want a consistent supply of produce throughout a growing season, not a glut followed by a shortage then another glut. And growers want to time their harvest when labor is available and demand is high so they can maximize profits.Harvest-timing helps ensure a consistent supply of fresh produce for local restaurants and for community-supported agriculture operations that deliver fresh produce to customers.

“We plan for each week’s (CSA) share very carefully,”said Tanya Murray from Sauvie Island Organics in Oregon. “The dramatically different weather we’ve had this spring, and last, makes it hard to know what to expect. Using degree days to predict days to maturity would be very helpful.”

The team has more than a dozen of those models up on the Croptime site now, and plans to have 50 loaded by spring 2017. The number of models it will take for the site to become widely used is an open question.

“Vegetable growers typically grow several varieties of the same crop, so we might have to get close to 200 models for it to really be noticed,” Coop said. “It’ll take a lot of effort to get to that.”

One way the system might be most useful is helping growers choose unfamiliar varieties to meet unexpected needs.

“When we have a couple weeks of wet weather in spring, we could use Croptime to choose varieties we might not be familiar with but that would help keep our production up,” explained Bob Egger of the Pumpkin Patch farm in Sauvie Island, Oregon.

To help build the number of models, the team is looking at the idea of developing a standard for each crop, then indexing individual varieties to that standard, Coop said. So one carrot variety might develop 10 percent faster than the standard carrot and another 10 percent slower, and Croptime could automatically make the adjustment.

The whole system is based on using local weather conditions and forecasts, so growers can select the weather station nearest their farm. They then select from a number of different forecasts, including the 30-year historical average, 10-year historical average, last year’s weather, two years ago’s weather, and a new forecast by the National Oceanic and Atmospheric Administration built from several different climate models.

“The default is the NOAA model, but if a grower thinks conditions are a lot like last year, or two years ago, they can select those instead,” Andrews said.

Once they’ve chosen a weather station and forecast to use, growers select the vegetable variety they are interested in and enter up to four different planting dates. Croptime then displays a report showing the dates that crop will go through critical stages – first leaves, flowering and reaching maturity for harvest.

Growers testing the site quickly pointed out a way to make it more useful.

“They want to enter a harvest date and have it display the planting date,” Andrews said. “It’s a really good feature and we thought, ‘Huh, we should have thought of that.’”

The team is also looking to add resources to the system, such as an irrigation scheduler developed by Washington State University. They also want to share Croptime models with other states and verify models indifferent climate zones to expand its usefulness beyond the Willamette Valley.

“It’s a long-term project,” Coop said. “We need to keep finding funding, and then we can expand it regionally, expand the database of varieties and focus on different crop types, such as winter vegetables and cover crops.”