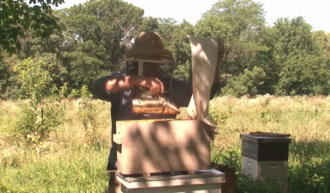 It is no secret that we are losing bees at higher rates than ever before: On average, beekeepers lose 33 percent of their hives each year. This unfortunate occurrence is known as Colony Collapse Disorder, caused by many different factors such as disease, the varroa mite, pesticide poisoning and habitat loss. And while most bees today are raised in warm climates to be highly productive, they are not necessarily resilient to pests, diseases and cold weather.

To help increase the prevalence of locally-raised bees in Illinois, beekeeper Stu Jacobson used a SARE grant to start the Illinois Queen Initiative (IQI). The organization provides training to beekeepers on how to raise queens that are adapted to Illinois’ harsh winters, and resistant to disease and the varroa mite.

Since 2008, the IQI has conducted trainings and workshops around SARE’s North Central Region, and has helped create a queen rearing industry in Illinois. “Before we started the first grant, there was one person raising queens that I know of in Illinois that was selling them,” says Stu. “Now there’s about eight, which doesn’t sound like a great deal but it has steadily grown over the past eight years and I’m hoping it will continue to grow.”