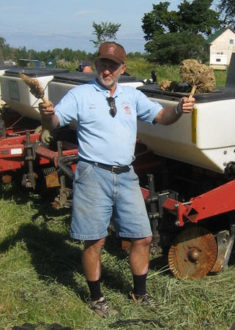 Summertime for dairy farmers in New England is anything but slow. Silage corn must be planted and harvested in a short window to provide high-quality forage for cattle, leaving little time to plant cover crops to replenish the soil. Under pressure to get corn planted early, farmers may delay the first cutting of hay, sacrificing forage quality.

To help dairy farmers optimize overall forage production and quality, SARE-funded researchers led field trials and demonstrations in three New England states to determine the benefits of cover crops, no-till and shorter-season corn silage varieties. They found that planting silage corn using no-till reduced time and money spent in the field—to the tune of $50 per acre. Farmer participants accomplished this by reducing fuel use on average by 5.7 gallons per acre and time in the field by 2.75 hours per acre. And at $30 per acre, the cost of planting cover crops effectively replaced nitrogen fertilizer, both in cost and N availability.

“Winter cover crops were not something that we used on every field before no-till, but now they are essential,” say silage farmers Jeffrey and Penny Stevens, who participated in the project and have adopted these innovations. “Our fuel costs are lower and the cover crops replace some of our fertilizer inputs.”

The research team, led by University of Maine Cooperative Extension Educator Rick Kersbergen, demonstrated that a combination of shorter-season silage corn and no-till planting freed up time for farmer participants to incorporate cover crops into their rotation. The improvement in forage quality—without sacrificing yield—resulted in increased milk production and farm profitability. “It is critical to find ways to reduce costs for dairy farmers to stay viable. And quality forage production is critical for farmers reducing input costs,” Kersbergen says.

Thirty-three of 103 farmers who responded to the post-project survey adopted no-till corn and cover crop strategies on almost 3,000 acres of land, primarily because of the economic benefits. They also cited improved moisture management and soil quality. “There was more adoption because we did trials on farm fields and held lots of field days,” Kersbergen says. “People saw the actual impact and results on other farmers’ fields—on commercial farms.”

Short-season corn had similar yields that were higher in quality than longer-season varieties, according to variety trials in Maine and Massachusetts. On one Maine farm in a 2012 trial, for example, researchers estimated that switching from a 94-day variety to an 85-day variety would increase income by $670 per acre, when using a milk value of $20 per hundredweight, because milk production per acre increased by 3,350 pounds.

For their work, Kersbergen and his colleagues received the 2013 Search for Excellence in Sustainable Agriculture Award. Sponsored by SARE and the National Association of County Agricultural Agents (NACAA), the award recognizes four NACAA members each year for excellence in the development and implementation of educational programs that advance the adoption of sustainable management practices.