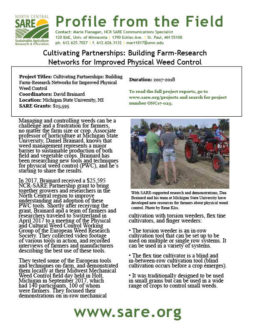 Managing and controlling weeds can be a challenge and a frustration for farmers, no matter the farm size or crop. Associate professor of horticulture at Michigan State University, Daniel Brainard, knows that weed management represents a major barrier to sustainable production of both field and vegetable crops. Brainard has been researching new tools and techniques for physical weed control (PWC), and he’s starting to share the results. In 2017, Brainard received a $25,595 NCR-SARE Partnership grant to bring together growers and researchers in the North Central region to improve understanding and adoption of these PWC tools. Shortly after receiving the grant, Brainard and a team of farmers and researchers traveled to Switzerland in April 2017 to a meeting of the Physical and Cultural Weed Control Working Group of the European Weed Research Society. They collected video footage of various tools in action, and recorded interviews of farmers and manufacturers describing the best use of these tools. They tested some of the European tools and techniques on-farm, and demonstrated them locally at their Midwest Mechanical Weed Control field day held in Holt, Michigan in September 2017, which had 140 participants, 100 of whom were farmers. They focused their demonstrations on in-row mechanical cultivation with torsion weeders, flex tine cultivators, and finger weeders:

• The torsion weeder is an in-row cultivation tool that can be set up to be used on multiple or single row systems. It can be used in a variety of systems.

• The flex tine cultivator is a blind and in-between-row cultivation tool (blind cultivation occurs before a crop emerges). It was traditionally designed to be used in small grains but can be used in a wide range of crops to control small weeds.

• The finger weeder is an in-row cultivation implement that can be used for multiple row systems and walk behind tractors. It can be used in direct seeded or transplanted crops.

“The consensus from both on-farm and research-farm trials was that the finger weeder and flex tine weeders are versatile tools that work well on a wide range of transplanted and large-seeded direct-seeded crops,” said Brainard. “Although the torsion weeder can also work extremely well under the right conditions, it is more difficult to calibrate and integrate into diverse farming systems, and works well under a narrower set of soil and environmental conditions.”

The project is ongoing, but thus far Brainard and his team have created videos demonstrating each of the tools in the field.

View Brainard’s presentation on this project, from the 2018 Farmer’s Forum through NCR-Sare’s Youtube playlist. Visit www.youtube.com/NCRSAREvideo for this and other videos.