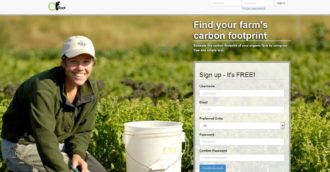 Often, farmers are willing to make changes in their growing practices to reduce their greenhouse gas (GHG) emissions and their climate impact. Whether conventional or organic, agriculture can be a source of GHG emissions. Those farmers eager to modify their practices may lack the knowledge and tools to make effective choices. According to graduate student Cornelius Adewale, the use of carbon footprint calculators (CFC) based on farm practices, inputs, infrastructure, and processes can fill in these knowledge gaps. His Western SARE funded graduate student project focused on identifying opportunities to reduce farm GHG emissions in wheat and onion production and using that information to improve the organic carbon footprint calculator, OFoot.

During the project, hundreds of Pacific Northwest farmers and scientists learned of OFoot or were trained in its use. Adewale believes that the information learned from his project now provides necessary information and tools to farmers so that they may make changes in behaviors to reduce their GHG emissions. Farmers now have the ability to identify and reduce GHG hotspots, partake in the carbon trading industry, and educate their consumers.

On one farm alone, the use of a lower GHG form of energy lowered the farm’s total CF by over 30%.

While Adewale found that each of the studied four organic farms had different sources of GHG and hotspots in their carbon footprint (CF), it became clear that fuel and energy use was a large CF contributor on all operations. Adewale says that the farmers engaged in his project “are switching or considering switches to alternative energy sources.” The research and use of the improved OFoot established that switching to biodiesel and solar energy are approaches that can reduce footprints, yet do not overly complicate daily operations.

Use of the calculator showed that tillage and related fuel use contributed 32% of the total footprint on one farm. Irrigation contributed over 18% on this farm. In every case where irrigation was used, water pumping was a large use of on-farm energy.