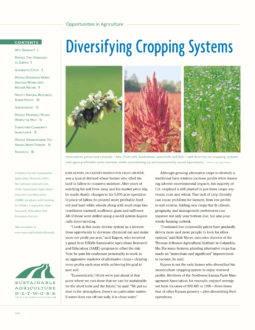 This bulletin will provide you with a jumping-off point to diversify your farm, from choosing the right new crops to managing them successfully. While some alternative crops command high prices, others pay dividends by building natural resources or boosting the yields of rotational crops. And growing crops that require processing, for example, can provide jobs in your community.

Growing a diverse selection of crops can expand your markets and offset commodity price swings. Consequently, profits won’t depend exclusively on any one market, as they might, for example, when you only produce crops for livestock feed.

Overall, the economic picture improves with strategic diversification. Gross income for an alternative crop may be higher and production costs may drop. For example, adding legumes to a rotation reduces the need to purchase nitrogen fertilizer. Moreover, rotations that include three or more crops usually have fewer problems with pests – and less need for pesticides.

Keep in mind that post-harvest handling and transportation to more distant markets may increase costs. In addition, while specialty crops like fruits, vegetables, ornamentals or nuts can dramatically increase income per acre, they usually demand more intensive labor.

Diverse rotations also reduce economic risk associated with unfavorable weather or pest damage in any one crop. Despite drought, for example, you can successfully harvest such crops as amaranth, millet, safflower, sesame and sunflowers. In central Missouri, diversified crop farmer Jerry Weber grows sunflowers because they are able to use moisture present throughout the soil profile and yield “reasonably well,” even when timely rains don’t come. By comparison, sufficient moisture at pollination can make or break a corn crop.

“Growing different kinds of crops that have needs for moisture at slightly different times is what tends to spread your risk,” Weber said. “Any time you can spread that risk is an advantage, and that’s why we got involved in diversifying crops.” Over the six years since Weber started growing sunflowers, they have been as profitable or more profitable than any of his other crops, such as corn, milo and soybeans.

Even if the profit from a new crop is negligible – or negative – you can still benefit economically from an expanded rotation. Labor and equipment are distributed more smoothly through the year, thereby increasing operational efficiency and decreasing payroll costs. Broader diversity also can raise the yields of traditional crops. With its deep taproot, amaranth opens up compacted soils for the roots of the subsequent crop. In one grower’s fields, growing amaranth added a 5- to 10- bushel per-acre increase to the wheat crop that followed it.

In Washington, diversification enables Kupers to match his crops to his variable growing conditions as well as to a fluctuating marketplace. “There is no recipe,” he said. “I know my work would be much simpler if there were, but there are simply too many variables. I take into account the weed and pest cycles, market conditions and moisture, and make decisions based on all these things.”

As markets expand for diverse products, you may find more opportunities, although you might need to overcome challenges like distribution bottlenecks.

New market supply chains offer farmers new opportunities to produce more value and retain more of that value on the farm,” said Fred Kirschenmann, a North Dakota organic grain grower. “An increasing number of customers want a story with the food they buy, which provides opportunities to market ecologically sound farming,” he said. “The market for sustainably produced goods is there; what we need to do is develop the supply chains that connect the farmer producing those foods to the customer.”

Over the years, the U.S. agricultural landscape has lost some of its natural features, from native trees along stream banks to fewer vegetative field borders. Yet the complexity and diversity of an ecosystem are at the root of its health.

Ecosystems with greater diversity are usually more stable: they withstand disturbances and can recover better than less diverse systems. The more diverse the plants, animals and soil-borne organisms that inhabit a farming system, the more diverse the populations of pest-fighting beneficial organisms a farm can support. For example, healthy soils enriched and revitalized by rotation and cover crops promote root development and water infiltration, thus are less prone to disease.

In Big Sandy, Mont., Bob Quinn attributes his farm’s profitability to its soil-building and pest-thwarting four- to five-year rotations. Its alfalfa, clover and grain fields are thick with predacious lady beetles, and Quinn’s last serious insect infestation was 15 years ago. Similarly, the viral diseases and root rots that used to harm the farm’s grains are “mostly gone,” Quinn said.

“Most people can’t believe it,” he added. “For many years, people thought I was spraying at night.”

With no large livestock operations nearby to supply manure, the farm’s primary soil improvement amendment is green manure. In high-moisture years,Quinn sows weed-suppressing alfalfa. In intermediate-moisture years, Quinn and his farming partner plant less-thirsty sweet clover with a companion grain, then disk or plow it under the next season. In very dry years, they sow green-manure peas in the fall or green-manure lentils in the spring, turning them under by the first of June.

“The rotation and soil-building program we have in place allows a great diversity in soil biology, and that’s what keeps the pests in place,” Quinn said.

In west central Iowa, Ron and Maria Rosmann use primarily a six-year rotation: corn, soybeans, corn, small grains and two years of alfalfa. They plant windbreaks, grassy field borders and native prairie species for pheasants and quail. Generous populations of lacewings and ladybugs indicate that the Rosmanns’ commitment to biodiversity is keeping predators in balance with prey.

The Rosmanns have only used one insecticide – Bacillus thuringiensis against corn borers – on their farm in the past 20 years.

DEN unites teams through statewide workshops and conferences. Transforming people and catalyzing groups is one of its fundamental objectives. “Often, people will try to start new ventures on their own,” said Jim Worstell, DEN executive director. “We have this myth about the lone entrepreneur establishing businesses, but very seldom does it work that way.”

Instead, Worstell said, “You have to have a team.”