Learn about SARE's broader impact on social issues in the United States.

"What I learned from the training is that sometimes we over-apply fertilizers and sometimes we under-apply. We must know what’s in the soil before we plant." 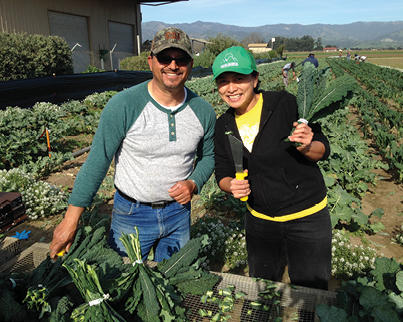 Managing nitrogen (N) effectively helps farmers raise a high-quality crop, avoid wasting dollars and protect water quality. Yet in the highly productive Salinas Valley of Monterey County, Calif., many farmers who use organic practices lack complete information on effective N management. This is particularly true of beginning farmers and those who have a language barrier or otherwise have limited access to support services. Organic agriculture is big business in Monterey County—the county’s organic sales volume was $151 million in 2012, higher than most states. The challenge, then, is ensuring that all organic growers in the area have the best opportunity to succeed.

Educators with the Agriculture and Land-Based Training Association (ALBA) used a 2013 SARE Professional/Producer grant to help fill this knowledge gap for area farmers. ALBA collaborated with experienced farmers and Extension specialists to hold workshops on organic N management and on-farm research principles. They stressed the importance of soil testing and synchronizing the supply of N with the needs of the crop throughout its growing season.

Using English and Spanish, the educators also provided in-depth training and support to nine beginning farmers participating in ALBA’s incubator program. The nine farmers, many of them Latino and former fieldworkers, conducted their own trials to compare kale and cilantro yields at different fertilization rates.

ALBA reached 500 growers and educators with N management information through workshops and distribution of new publications. As a result of participating in an ALBA workshop, surveyed farmers reported:

Visit the database of project reports to learn more about this SARE-funded project: OW13-062.