Sometimes farmers’ dollars literally evaporate into thin air. Take fertilizer for example: If not applied properly, up to 40 percent of urea fertilizer can escape into the atmosphere as ammonia gas, through a process called volatilization. In “a landmark study,” Montana State University (MSU) researchers recently found that some fairly simple changes in fertilizer application methods can significantly reduce nitrogen volatilization. Now, no-till wheat farmers in the state are better able to minimize this economic loss and source of air pollution.

A key recommendation developed by the researchers, whose on-farm study was funded by SARE, is that farmers should apply fertilizer in the spring rather than the winter or fall, and should take weather conditions into account. They found that nitrogen losses in the spring averaged 1.9 percent, while winter and fall losses were as high as 16.3 and 11.4 percent, respectively. Less volatilization occurs when fertilizer is applied on dry ground or in advance of rain than when applied on wet, snowy or icy ground. “A lot is dictated by the conditions that follow the application of the fertilizer material, as well as the moisture conditions at the time of the application,” says MSU Soil Scientist Rick Engel.

“This was a landmark study because…we knew we were losing nitrogen, we just didn’t know how we were losing it,” says Curtis Hershberger, a Montana wheat farmer who participated in the study. “Nitrogen is a very big input cost for us, so by mitigating the losses of nitrogen and improving our crops, it helps our bottom line. It makes our business so much more sustainable, so we’re not wasting money and having lower yields as a result of what we do.”

The study focused on urea applications because it is the nitrogen fertilizer used by the majority of Montana farmers. Another critical finding was that applying urea with a urease inhibitor—which binds to the fertilizer and helps mitigate its loss—reduced volatilization by 64 percent. 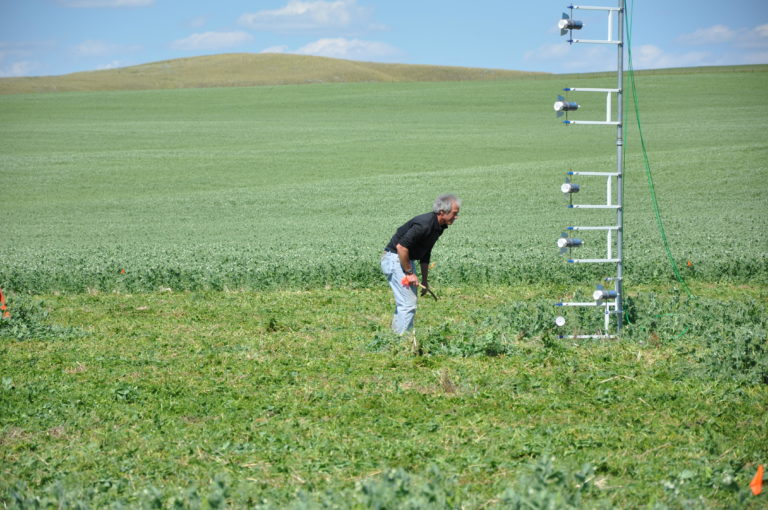 Encouraged by the positive results that came from the MSU team’s three years of field trials, approximately 50 percent of Montana wheat growers have made changes to their nitrogen management practices. The team estimates the collective economic impact for farmers who have adopted some or all of these nitrogen management recommendations is $5 million annually. “Any nitrogen loss from the soil system will potentially impact either yield or quality of crops,” Engel says.

Hershberger changed his practices by applying fertilizer below the soil surface when planting, injecting it directly into the soil so it does not have the chance to volatilize. “We feel that the change in management practices has been very rewarding to us economically,” he says. “We did have a great expense in changing our seeding equipment to band fertilizer below the surface, but we think we’ve been paid back just in the last few years.”

Along with conventional fertilizers, the team evaluated legume cover crops as a nitrogen source—particularly, whether volatilization was a concern when terminating a cover crop of field peas, either by mowing or herbicide application. They found that only a nominal amount of nitrogen loss was detected—equivalent to 0.3 and 0.5 percent of the nitrogen in the plant biomass—meaning that farmers who use field peas for nitrogen do not need to worry about volatilization losses.

For more information, see the project reports for grant SW10-050.