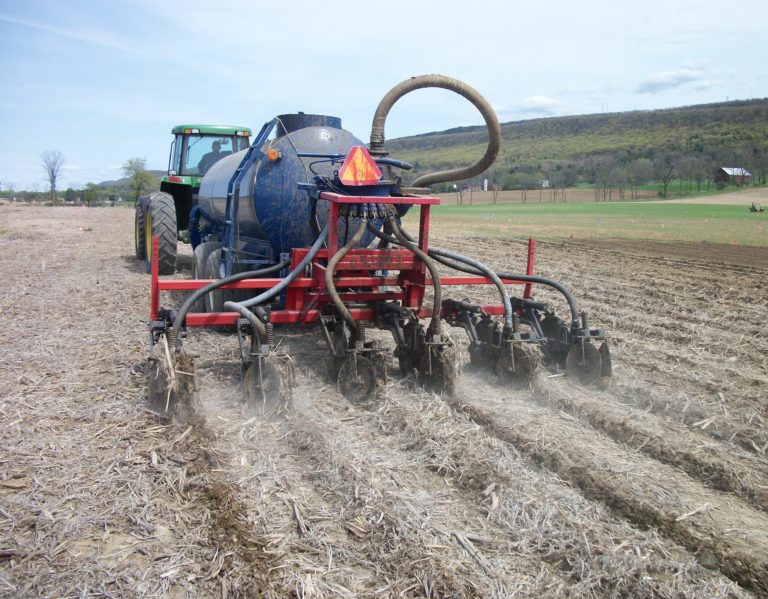 Penn State researchers have found that dairy farmers can save up to 70 pounds of nitrogen per acre by injecting manure instead of broadcasting it. Photo by Robert Meinen

When Heather Karsten, a new PhD student, stepped off the plane in New Zealand with a Fulbright Award to study grazing systems, she knew she wanted to use her new-found knowledge to improve livestock cropping systems in the United States. Two decades later, Karsten is putting to good use what she gleaned about perennial forages all those years ago.

Karsten is the project director of a large-scale, multidisciplinary research effort that is helping to create more sustainable cropping systems for Northeastern dairy farmers. Funded by a SARE grant, the project has already begun to show how farmers can reduce off-farm inputs such as fertilizer while maintaining productivity.

“I’ve always wanted to promote perennial systems in the Northeast and the United States, and that has evolved into not just integrating perennials into cropping systems, but also mimicking perennial cover or continuous cover by integrating double crops and cover crops into annual crop rotations,” says Karsten, associate professor of crop production/ecology at Penn State University.

As such, the project, which involves a multidisciplinary group of researchers, Extension agents, students and farmer advisors, compares two six-year no-till rotations that include perennials such as alfalfa intercropped with orchardgrass, wheat or rye underseeded with red clover, winter canola, corn and soybeans. A standard corn/soybean rotation is used as a control treatment. While one no-till rotation compares broadcast and injected manure treatments, and the other compares standard weed control with reduced herbicide treatments, both use multiple strategies to promote sustainability and minimize off-farm inputs to produce forage, feed and fuel for a simulated 65-cow, 240-acre dairy farm.

Initiated in 2010, the project has just begun producing a wealth of information. For example, researchers have found that by injecting instead of broadcasting manure, they can save up to 70 pounds of nitrogen per acre. They were also able to reduce herbicides in corn with banding and high-residue cultivation. Researchers were able to tweak the rotations so that by the end of year five, both systems were producing sufficient forage and feed for the farm, and turning a profit. It is this ability to respond to environmental and other pressures that makes systems projects unique, as the researchers also found when dealing with an unexpected pest problem.

Originally, they hoped to plant late-summer, no-till alfalfa to reap its benefits as both a winter cover and a spring forage, but found the summer-planted stands subpar. The culprit? Two years of insect data pointed to slugs, feasting on an all-you-can-eat autumn buffet of alfalfa. The solution? Using oats as a winter cover and moving the alfalfa planting to early spring.

The insect data also led to some unexpected findings, another unique feature of systems experiments. While monitoring pests, researchers found, not unexpectedly, higher predation by beneficial insects in the diverse systems. They also found that while insecticide-treated seeds had no impact on slug populations, surprisingly, the insecticides were harming the beetle populations that fed on the slugs—a valuable reminder of the negative impact pesticides can have on the larger ecosystem, and especially on beneficial ecosystem services.

“It makes a good argument that seed insecticides can be counter-productive to ecological pest management, and that a better strategy would be to avoid preemptive insecticide applications and create habitat with diverse rotations to protect biological control organisms,” Karsten says.