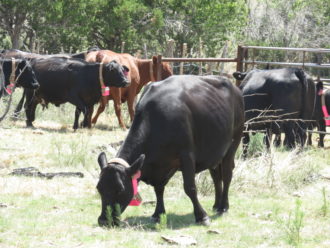 But some cows never got that memo.

“I’ve been watching cattle for years, and there are always some cows that just take off for the hills, like they didn’t know they weren’t elk,” said Derek Bailey, a professor of range science at New Mexico State University. “They could be belly-deep in green grass, and just bolt for the hills. They like it up there.”

That got Bailey thinking.

“We can breed for other traits,” he said. “Why not select for hill climbing?”

If ranchers could select for the hill-climbing trait, the same way they select for any number of other genetic traits, it could have huge implications throughout the rugged West. They could graze more cows on mountainous ranches. Rangeland would be more productive and more evenly utilized. Riparian areas could be more easily protected.

“We think this could make a big difference on the ground,” Bailey said. “In agriculture, if you can get a three to five percent improvement, it’s huge. We think if ranchers can get more use and grazing on slopes, they could increase stocking rates by as much as a third – and do it sustainably. In other places, it’ll solve riparian problems. There’s a lot of upside if we get it done.”

Bailey is working with a team of scientists located across the  West to investigate this opportunity, including Milt Thomas, Scott Speidel and Mark Enns at Colorado State University, Juan Medrano at UC Davis, and Larry Howery at University of Arizona.  They turned to the Western Sustainable Agriculture Research and Education Program to fund the basic research that could soon turn into a cheap breeding test that would allow ranchers to select for hill-climbing traits.

To identify hill-climbing cattle, Bailey and his crew put Global Positioning System collars on cows on ranches in several Western states and took measurements every 10 minutes for months at a time. They tracked each cow’s movements and habits – their slope use, elevation gain and distance traveled from water.

“The secret to this is more data,” Bailey said. “So we’ve been tracking cows all over.”

They also take blood samples from all the collared cows that Medrano and his team analyzed for chromosomal commonalities. Medrano found overlap in genes linked to locomotion, motivation and spatial learning.

Dick and Erin Evans have the kind of spread where this research matters. They ranch on 24,000 acres in the Big Burro Mountains in Southwest New Mexico. It’s rough country and more than half of it is federal land or state land. To be profitable, the Evans’ cattle have to be efficient, and even before connecting with Bailey they were thinking along similar lines.

They theorized that cows going several days without water were more efficient – water and grazing are linked – and that those cows were likely grazing further afield. But once they started working with Bailey, the GPS data told a different story.

“We had one cow we knew to be efficient and it would come to water every four or five days,” Dick Evans said. “But it never traveled more than a half-mile away from water.”

Like the Evans’ ranch, much Western rangeland is mountainous or hilly and managed for livestock production. Grazing on rangeland feeds livestock and also offers many environmental benefits such as keeping weeds and other invasive species in check, providing water storage and carbon sequestration, and supporting habitat for animals and plants found nowhere else in the world.

Problems arise, though, when rangeland is overgrazed and cattle spend too much time near running water where manure and calving can create water-quality risks for people downstream.

Researchers have been working for decades with ranchers to keep cattle from overgrazing and congregating by creeks. They build strategic fencing, for example, and provide water and salt licks on ridgetops away from running water. Cowboys often herd cattle from low-lying pastures, but all of those management practices are labor-intensive and only a temporary fix. Breeding for the behavior would be much more efficient.

But breeding for one trait can sometimes produce unintended consequences in others. The researchers are looking closely at that possibility, and have so far found no correlation between hill-climbing behavior and undesired traits.

“We’ve looked at calf-weaning weights, pregnancy rates, blood pressure, even disposition,” Bailey said. “We had one theory that hill-climbing cows tended toward the meaner end of the scale, but that’s not the case.

“Some cows just prefer to climb more than other cows,” he said. “And if breeding can move the bell curve in that direction, management tools like fencing and herding will be much more effective.”

Dick and Erin Evans said they would happily add those genetic traits to their carefully selected herd, and not even to increase the numbers they could graze. They’re excited for the benefits widely distributed grazing could bring to the land itself.