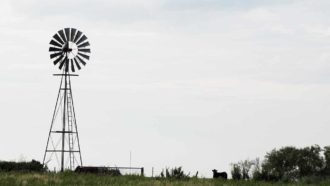 As the drought in the Texas High Plains continues to intensify, a unique partnership of producers and researchers is working diligently to find economically viable alternatives to the region’s irrigation-dependent crop monocultures. The single source of irrigation water for the region is the massive, underground aquifer known as the Ogallala, one of the largest fresh-water aquifers in the world. It was formed millions of years ago from the erosion of the Rocky Mountains and now traverses through portions of eight states—Colorado, Kansas, Nebraska, New Mexico, Oklahoma, South Dakota, Texas and Wyoming—providing 30 percent of the United States’ irrigation, and contributing to an astounding 20 percent of the country’s entire agricultural output.

In the West Texas High Plains, an area that receives only 18 inches of rainfall annually in an average year, the Ogallala is a crucial, but finite resource. Even before the recent drought, it was clear that the area’s increasing number of irrigation wells, and a lack of adequate recharge, was bringing High Plains agriculture to a crisis point.

This short documentary is about a committed and cutting-edge research team at Texas Tech University that is using a collaborative systems approach to explore innovative agricultural alternatives that use less water. Initial funding for the long-term project and team—called the Texas Coalition for Sustainable Integrated Systems Research (TeCSIS)—was provided 15 years ago by the Southern Sustainable Agriculture Research and Education (SARE) program. This initial grant has since been leveraged into a $6.2 million grant from the state of Texas, which led to the creation of a coalition of producers and researchers called the Texas Alliance for Water Conservation (TAWC). Together, TAWC and TeCSIS are evaluating a number of alternative crop and livestock systems, looking at such factors as total water use, water-use efficiency, productivity of crops and livestock, and economic profitability.

Watch the video to learn how researchers and producers are using creative and collaborative methods to develop new opportunities for agriculture in the Texas’ arid plains.

A supplement to the video, Agricultural Systems to Reduce Water Use in the Texas High Plains, is also available: