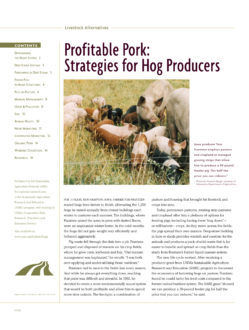 While meat producers once sold products directly to customers, the modern feedlot-to-wholesale system sends most meat to the grocery store case. Recently, however, a surge of interest has renewed direct farmer-to-customer meat sales. While selling meat directly offers farmers and ranchers a chance to retain a greater profit share, finding a reliable, small-scale processor who meets federal and state food safety regulations may be difficult.

Meat producers will likely find few slaughterhouses that accept small quantities. A number of innovative pork producers are managing to bridge the gap by forging contracts with small slaughterhouses, pooling hogs or taking advantage of new mobile ‘processors on wheels’ funded by programs like SARE.

Hog producers can develop niche markets for their pork by emphasizing the animal welfare benefits or environmentally friendly aspects of their systems.

A survey of Colorado, Utah and New Mexico grocery shoppers determined that many especially high-income frequent pork consumers and those concerned about growth hormones and antibiotic use  are willing to pay a premium. ‘These target consumers are very concerned about the production practices utilized by the producers,’ writes Jennifer Grannis and Dawn Thilmany of Colorado State University, who surveyed 2,200 shoppers and analyzed 1,400 responses in 1999. ‘A highly visible and descriptive label that highlights production practices must be part of the packaging.’

Research funded by the Leopold Center at Ames, Iowa, found that consumers would pay nearly $1 more for a package of pork chops labeled as produced under an environmentally friendly alternative system. (The study defined the ‘most environmentally raised pork product’ as being produced in a way that results in 80 to 90 percent odor abatement and 40 to 50 percent reduction in surface water pollution.) The study by ISU economics professor James Kliebenstein surveyed randomly selected consumers in four diverse market areas. Of those, 62 percent said they would pay a premium for pork raised with such a guarantee.

‘As the industry develops methods that help sustain or improve the environment, a segment of society will support a market for such products,’ Kliebenstein said.

To gauge potential for pasture-raised pork in Arkansas, the Arkansas Land and Farm Development Corporation (ALFDC) worked with the University of Arkansas, partly funded by SARE, to conduct market research into consumer perceptions and preferences.

Almost 70 percent of respondents to a 1998 questionnaire sent to 1,200 consumers and 42 supermarkets and restaurants in the Delta region indicated a preference for ‘environmentally friendly’ pork products over conventional. More than 73 percent identified pasture-raised pork as natural and healthy, and 65 percent of retailers preferred to sell local, organically grown meat if available at premium prices.

After perfecting his rotational grazing system, LaGrange, Ind., hog producer Greg Gunthorp turned to marketing. ‘I spend more time marketing than I do farming,’ he said.

Meeting and getting to know the chefs at the best restaurants in Chicago is a major focus, and Gunthorp travels more than 100 miles to the city at least once a week to talk with them in their kitchens. Once the chefs have tasted his product, Gunthorp has little trouble getting orders. He also sells pork at a popular Chicago farmers market, where he simultaneously promotes his burgeoning catering business, which has ranged from wedding receptions to company picnics to family barbecues.

It costs Gunthorp an average of 30 cents per pound to raise a hog to maturity. The lowest price he now gets for his pork is $2 per pound, although he commands as much as $7 per pound for suckling pigs  which weigh in at 25 pounds or less. Overall, Gunthorp’s prices average 10 times what hogs fetch on the commodities market.

The bottom line for Gunthorp is making enough money to keep his family healthy and happy. ‘We can get by just selling 1,000 pigs a year, and the smarter I can raise them and sell them, the better off we’ll be,’ he said.

Direct marketing drives the Hayes’ operation in Warnerville, N.Y. Sap Bush Hollow Farm markets a variety of meat directly to about 400 consumers in New York, Massachusetts, Connecticut and Vermont. They sell a lot of poultry and beef and about 40 pigs each year.

They sell in bulk and as retail cuts  to restaurants, stores and directly from their home  to eliminate distribution costs. Adele Hayes uses newsletters, postcards and even phone calls to inform customers of sale days and products available.

‘The demand is incredible for field-raised, naturally raised pork,’ she said. ‘The taste, according to us and our customers, is far superior, as well as the texture.’

In the New England climate, the Hayeses send the pigs outside to graze throughout the summer, then keep them in a barn equipped with deep bedding during the cold months.

Even when it’s cold, the pigs get access to the outdoors and help advance the Hayes’ composting process by rooting through vegetative material.

The couple uses two federally inspected slaughterhouses, although, for the Hayeses, like many other small meat producers in the Northeast, the decreasing number of slaughterhouses remains challenging. ‘Our biggest problem continues to be reliable slaughter and processing in a timely fashion for our customers,’ Hayes said.