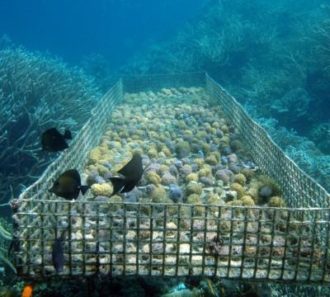 The Federated States of Micronesia (FSM) and the Republic of the Marshall Islands (RMI) are fledgling sovereign nations. Both nations have low per capita GDP and high unemployment. Like many developing small island nations, the FSM and RMI are economically marginalized. The people of FSM and RMI have skills and resources for aquaculture, agriculture, and agro-forestry but the nations’ economic development lags far behind the potential. According to Simon Ellis, director of the Marine and Environmental Research Institute of Pohnpei (MERIP), one of the most successful aquaculture enterprises in the FSM and RMI to date has been farming of marine ornamental invertebrates for supplying home aquariums in the United States and Europe. Giant clams, hard and soft corals, ornamental sponges, zooanthids, and corallimorphs are all cultured using simple techniques for live export via air freight. Ellis states, “Importantly, these methods of farming are considered highly sustainable with extremely low environmental impact and are endorsed and promoted by conservation groups and local governments as a means of income generation and poverty alleviation for rural communities. In addition, marine ornamental farming is identified as a key economic development activity for the FSM and RMI.” Ellis designed his Western SARE Professional Development Program project, “Training in Marine Ornamental Farming for Extension Professionals in Micronesia (project number EW11-001),” with the assumption that the marine ornamental aquaculture industry in Micronesia could be improved by better skills, knowledge, and communication between practitioners.

Searching for a Solution

This project’s objectives were:

The project aimed for 25-30 individuals with outreach responsibilities to receive training. Land grant and faculty professionals who work in aquaculture education and outreach from the College of Micronesia – FSM (COM-FSM) and College of the Marshall Islands (CMI) were the primary audience. In addition, MERIP staff and private sector practitioners from Kosrae and Majuro were part of the learning group, as well as members from the local fisheries management agencies in Pohnpei, Kosrae, and Majuro and key personnel from grass roots conservation groups that promote sustainable aquaculture in the region.

In total 53 people involved in the marine ornamental industry received training or outreach from this project. According to Ellis, in 2012, three activities occurred:

Project follow-ups were conducted in 2013 and early 2015 and technical assistance was provided throughout the project period.

Key participants reported sustained increased productivity, activity and coordination between producers and extension workers; increased skill levels; and new partnerships. Results of an exit survey from the Pohnpei workshop indicate that all participants strongly felt they had a better understanding of the marine ornamental industry. Further, all felt the workshop would help them with their work and 86% said they would use methods used in their training in the next six months.

Ellis described the project as a “massive success.” Testimonials include:

Ellis says, “While number of producers in the Micronesia region is quite small, the workshops and site visits helped greatly to garner collaboration.” Examples of changes include:

Where to Learn More