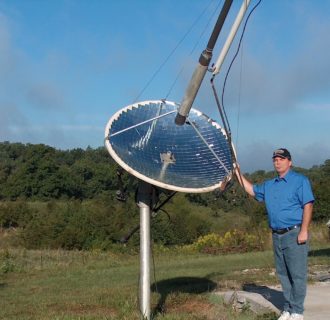 As tree fruit growers know well, annual harvests do not remove all the fruit from the orchard. A great deal is left behind littering the orchard floor. While pondering his fruit waste problem, Dan West of Macon, Mo., who grows apples, peaches, apricots, nectarines, plums and pears, hit upon a novel approach: Why not turn the waste into energy?

West already had been distilling the waste fruit into natural wine using a still he designed out of a beer keg. (West received a distilling permit from the Bureau of Alcohol, Tobacco, Firearms and Explosives.) Then, driven by an over-supply of waste fruit, coupled with his growing concern about the supply and cost of fossil fuel, West decided to produce ethanol from his fruit wine by heating it and removing the alcohol, at a rate of about 1.5 gallons per hour.

“Using waste was the main thing,” recalled West, who has been running an orchard on 10 acres since 1995, and received a SARE grant in 2003 to experiment with ethanol production. “I also thought it would be nice to be self-sufficient, using our ethanol to power our mower and tractor.”

West built a second still from a 500-gallon propane tank, in which he heats his fruit wine to just below boiling, gathers steam in a fractionating column, and distills the alcohol portion of that steam to 190 proof. This still should easily produce 4–5 gallons per hour, although he expects to speed up the distillation as he improves the second still.

“Even at $2-a-gallon fuel prices, my ethanol distillation process is well worth doing,” West said. Discounting the labor to gather and crush fruit — now his most time-consuming task — distillation costs only 65 cents per gallon in electricity costs. Those gallons of ethanol, however, now power his farm engines at a higher octane than gasoline and provide a cleaner burn.

“It’s exciting,” he said, reflecting on the first time he powered up his lawn tractor with homemade ethanol.

Others have been similarly fired up. At least 1,000 people per year visit West’s orchard, about 120 miles from Kansas City, in part to see his energy-saving invention.

West never stops thinking up innovative ways to get the most from his farm. Since gathering waste fruit is time consuming, he has focused his keen inventor’s mind on finding a better way. With a second SARE grant, West is designing a machine that gathers up waste fruit, then crushes it into pulp, some of which is spread back on the orchard floor as fertilizer, and some of which is squeezed into juice and then fermented into wine.

West also received another SARE grant to design a closed-loop energy production system using a solar concentrating method that reduces electricity needed to heat the still. The prototype has produced 170-proof ethanol. “When it worked after three or four tweaks, I was jumping up and down,” he recalled. “Winning the initial grant opened up many doors for me.”