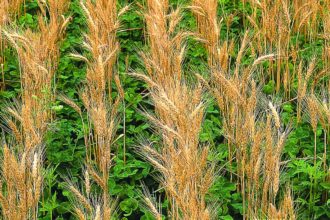 The Soil as a Carbon Reservoir

Sequestering atmospheric carbon (CO2) in the soil helps to offset greenhouse gas emissions, such as the carbon dioxide emitted by cars, power plants and other burning of fossil fuels. The soil has significant potential to store carbon3 and to mitigate the effects of climate change. Farmers, scientists and policymakers across the globe are particularly interested in the potential contribution of agricultural practices, like cover crops, to the sequestration of carbon in the soil.4

Cover crops are an important soil carbon sequestration strategy. The roots and shoots of cover crops feed bacteria, fungi, earthworms and other soil organisms, which increases soil carbon levels over time. Some farmers think of this sequestration as “restoring” their soil carbon to the level that it was before cultivation or the initial plowing of the soil for agricultural production. Others are calling themselves “carbon farmers” or are expressing the importance of soil health in general by referring to their responsibility to care for the “herds” of microorganisms in the soil.

Though research has addressed the impact of cover crops on carbon sequestration on a global scale, the effect across the United States has not been thoroughly assessed. To address this question, a review and analysis was conducted of five literature sources that included data from 26 separate research trials.5 Each trial was required to have a minimum soil sampling depth of two inches and to have included soil carbon measurements before cover crop management began. For each research trial, a baseline method of analysis was used to understand the carbon sequestration factor associated with cover crop use. Those factors were then aggregated and the low, median and high values obtained. The results of the analysis show that cover crops have the potential to sequester approximately 60 million metric tons of CO2-equivalent per year when planted across 20 million acres (8.1 million hectares), offsetting the emissions from 12.8 million passenger vehicles.6

Through this analysis, it became clear that there are some important research needs that must be met to more clearly address the effect of cover crops on soil carbon.

Planting practices are changing so that cover crops can be grown for longer period of time with increased biomass accumulation. Practices such as interseeding cover crops into standing cash crops or “planting green” (planting a cash crop directly into a living cover crop) can extend the cover crop growing season, allowing for greater root and biomass growth.11 As cover crop acreage increases and more farmers adopt practices that maximize cover crop growth and ground coverage, the potential for biological carbon sequestration will grow.

5 This review was part of a larger assessment of cover crop effects on soil carbon, which assessed the results of 22 different studies and 78 total research trials, and explored cover crop impacts on preventing soil loss and associated emissions.