Cover crop management begins with determining the objectives for the cover crop and then selecting a cover crop (see previous sections). When first using cover crops, consider the additional management needs. For example, wheat might be a better choice than cereal rye for a winter cover crop if growers are new to cover crops. Cereal rye is taller and produces more biomass, making it more challenging to manage late in the spring. To reap the most benefits from them, be prepared to manage cover crops to the same extent as cash crops.

Cover crop benefits are usually maximized by operations that maximize biomass production, for example by planting as early as possible and terminating as late as possible. The planting window of the following cash crop is a primary consideration in cover crop termination timing. Timely spring termination of a cover crop avoids potential negative impacts. Excess residue can retain moisture in wet years, resulting in cooler soil temperatures and delayed planting. Cover crops can deplete critical soil moisture in a dry spring. Decisions about termination need to be based on predicted weather patterns and labor availability. Table 5.3 summarizes characteristics of several popular grass and legume species grown in the Southeast. Biomass production is shown as dry matter in pounds per acre per year, and the seeding rate is based on pure live seed.

Establish cover crops with quality seed that has a high germination rate and a low weed-seed content. Plant using a no-till drill, conventional drill or by broadcasting onto the soil surface. Planting cover crops with a drill is more reliable because it ensures proper seeding depth and adequate seed-soil contact. Conventional drills may work, but no-till drills are generally heavier and are designed to operate in residues present in conservation tillage systems. Regardless of the type of drill used, monitor and control the seeding depth to ensure proper seed placement. Calibrate the drill to plant the desired plant population based on pure live seed.

Broadcasting is faster than drilling and can be performed with a variety of equipment that spreads seed onto the soil surface over a wide area. Aerial seeding (broadcast seeding by airplane) and broadcasting with fall-applied phosphorus and potassium fertilizers are common in some areas. Higher seeding rates are needed when broadcasting because seeds are left on the soil surface and are exposed to fluctuating moisture conditions. Broadcast seeding is dependent on timely rainfall for germination and early growth. The amount of seed should be increased 20–30 percent compared to drilling to ensure an adequate stand. For best results, roll fields with a cultipacker or similar piece of equipment after broadcasting. The need for this additional field operation can negate the time-saving advantage of a broadcast application.

Legumes should be inoculated with a species-specific rhizobium inoculant. This ensures good nodulation and enhanced nitrogen fixation. Even in fields where legumes have been grown before, the small expense of rhizobium inoculant provides “insurance” that good nodulation will take place. Fields where legumes have not been grown before may require two years for the legume cover crop to maximize nitrogen fixation, especially on sandy Southern Coastal Plain soils.

Table 5.4 summarizes planting dates for various cover crops in different Southeastern regions. Optimal planting dates vary geographically as well as across latitudes within a geographic region. If cover crops are planted later than optimum, increase seeding rates to the maximum recommended rate to compensate for the reduced biomass due to the shorter growing season. Regional experts, such as the Cooperative Extension Service or NRCS, can make recommendations on planting dates for specific regions. 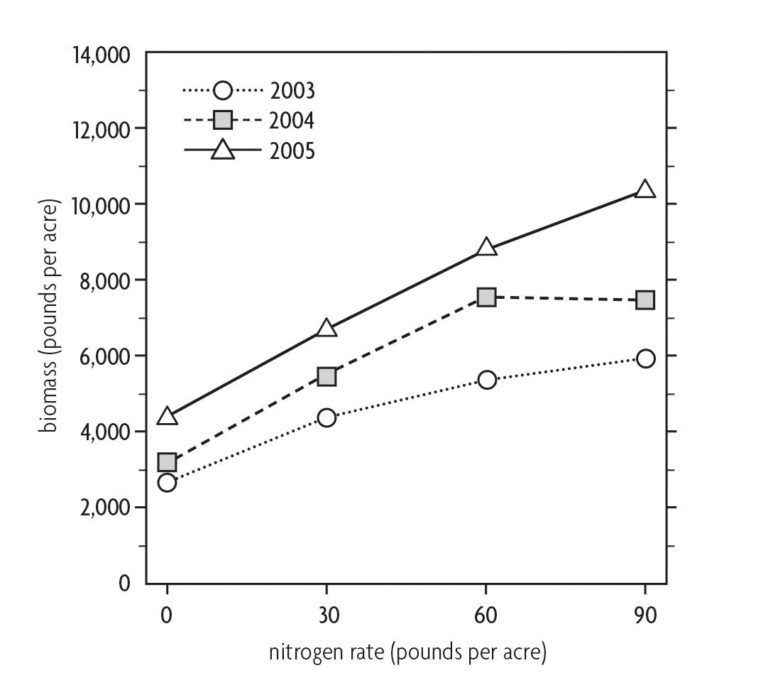 FIGURE 5.1. Rye biomass production following different nitrogen fertilization rates measured at the time of termination during the spring of three consecutive years at the Wiregrass Research and Extension Center in Headland, Ala.

As with cash crops, ensuring soil fertility and pH are within recommended ranges is essential for optimizing cover crop biomass production and associated benefits. Nitrogen can be limiting for biomass production, particularly for grass cover crops. Most producers are reluctant to apply nitrogen fertilizer to cover crops due to the cost and the absence of a direct monetary return from the cover crop. Due to the inherent low fertility of many Southeastern soils, cover crops generally respond positively to 30–50 pounds of nitrogen per acre (Figure 5.1). Biomass increases of 50–100 percent with nitrogen fertilization are not uncommon, particularly on sandy soils (Figure 5.2). Growers who are new to cover crops may decide not to apply nitrogen fertilizer until they have more experience. 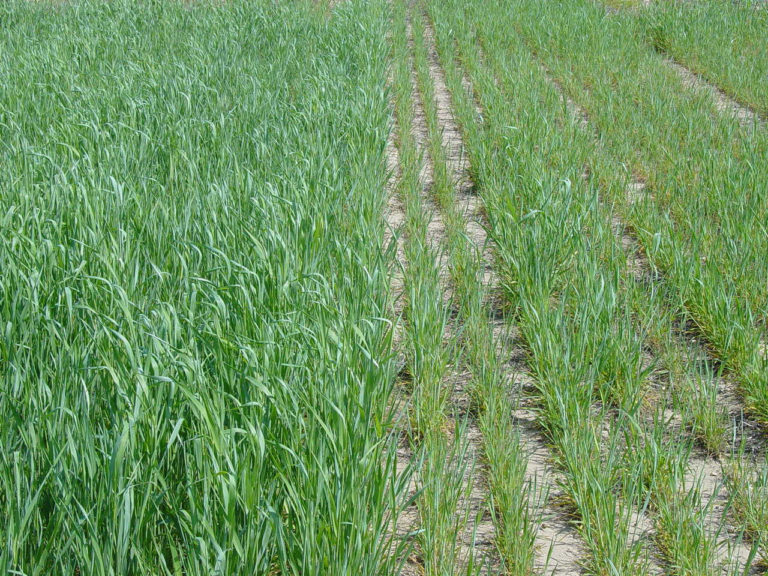 FIGURE 5.2. Rye biomass photographed in early March. Fertilizer was applied in fall to the rye on the left side, resulting in more biomass than the unfertilized rye on the right.

Cover crops should not be fertilized if your objective is nutrient scavenging. For soils with inherent fertility (i.e., soils with more than 2.5 percent organic matter or with a history of manure applications) or when following an extremely dry year with limited cash crop nitrogen uptake, additional nitrogen fertilizer is probably not needed and is not recommended. As cover crops decompose, their nutrients are released into the soil, but the availability of these nutrients does not always coincide with the following cash crop’s needs.

Cover crops can be used to attract beneficial insects. One approach is to allow a live strip of cover crop to remain between crop rows to serve as an insect habitat and food source until the main crop is established. This approach resulted in one less insecticide application in conservation-tilled cotton compared to conventional cotton in south Georgia [11]. This approach may be limited in the Southeast because there may not be adequate soil moisture to fulfill the needs of both the cash crop and cover crop.

Cover crop residues have also been shown to reduce the incidence of several diseases by reducing the splash dispersal of organisms. Small-grain cover crops in a conservation tillage system have been shown to reduce peanut yield losses from tomato spotted-wilt virus (TSWV), with greater residue amounts resulting in lower incidence of TSWV. This benefit was directly related to a reduction in the population of thrips, the vector of TSWV [5].

Some cover crops serve as an overwintering host for nematodes and may increase nematode damage to the following crop. This problem can be worse when crops are grown continuously, such as cotton in some areas of the Southeast. However, crop rotation can alleviate these problems, while some cover crops, such as brassicas, can reduce nematode populations.

Cover crops may be adversely affected by carryover of herbicides applied to the previous crop. Read the herbicide label carefully or seek local expertise.

With the vast number of potential combinations of crops, cover crops and diseases, consult local experts and practitioners to ensure that selected cover crops will minimize the potential for pest problems.