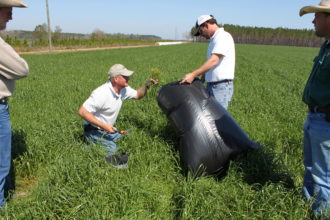 UGA Extension agents Randy Franks (middle left) and Mark Frye (middle right) collect samples of triticale on Greenview Farms, owned by Jonny Harris (far left) and his son, Paul Harris (far right). They are taking samples to analyze the forage as a soil-building cover crop and to measure its nutrional value as high-quality hay. These fields were harvested for baleage. Photo by Candace Pollock, Southern SARE

Jonny Harris noticed long ago that feeding winter cover crops to his cattle improves their diet, his fields and his bottom line. He wanted to show other southeastern Georgia farmers they can reap the same benefits, but he knew he needed more evidence than decades of personal experience.

“I understood that it was good, but we needed documentation. I couldn’t go to my neighbor and say if you use this as a forage cover crop, you can get this much production and market it for this much,” Harris says.

So, Harris applied for and received a 2011 SARE grant and, partnering with University of Georgia (UGA) Extension, began conducting cover crop trials that would yield the data they needed. By the second of three years, they have already begun to see convincing results.

An economic analysis of Harris’ trials revealed that while forage cover crops can be costly to produce, their nutritional value provides a cost-effective option for farmers. “On a per acre basis, they are expensive. There’s no way of getting around that,” says UGA Extension Livestock Economist Curt Lacy. “But when you convert that cost to how much nutrition you get per acre in terms of total digestible nutrients and crude protein, then it’s very economical.”

The cover crops they tested—grown on cultivated fields and harvested as baled silage—were a better value in terms of cost per pound of crude protein and total digestible nutrients than low-quality hay, corn, whole cottonseed and other feed options. Only high-quality hay was a better value. 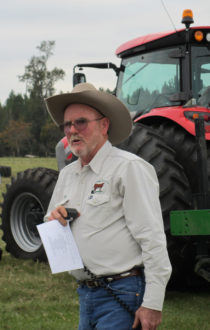 Harris’ Greenview Farms, in Screven, Ga., has been in his family since around 1860. It includes 2,800 acres of timberland, pasture for a herd of 1,000 cattle, and cultivated fields of cotton, corn, soybeans and peanuts. Harris has been using winter cover crops on his pastures since the 1950s and on his cultivated fields for the last 10 years.

The soils in Harris’ test plots have improved noticeably. Southeastern Georgia’s soils are sandy and low in organic matter, which means they do a bad job of holding water and plant nutrients. In the trials, his soil’s water-holding capacity has increased 15 to 20 percent, and soil organic matter has increased as much as 1 percent.

“What’s really outstanding is the quality of the soil, and how it’s improving dramatically,” says UGA Forage Extension Specialist Dennis Hancock, who is working with Harris. “I can tell just by the dark, rich color.” The data they are collecting help document these changes.

Along with soil quality, cotton yields also appear to be improving in the trials. In 2012, they harvested 1,600 pounds of lint per acre when cotton was planted after a cover crop of ryegrass, and 1,100 pounds per acre when no cover crop was used.

In his trials, Harris planted 45-acre combinations of ryegrass, triticale and crimson clover, followed by a cotton crop. He fed his baled silage on farm and sold to dairy and beef farmers. One neighboring dairyman saw a 20 percent increase in milk production after just a few days of feeding his cows this nutrient-rich silage, Harris says.

“Everything has been positive–the energy we’re able to produce from this grass, the way cattle are transferring those nutrients into meat or milk or whatever else the farmer needs,” Harris says. “We’re just seeing an abundance of positives.”