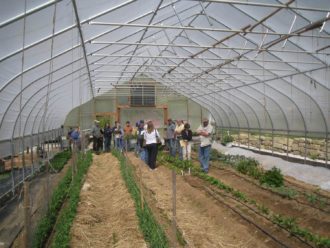 A tour during a high tunnel planting workshop.

For years now, small-scale vegetable farmers have been turning to high tunnels—cheap, unheated structures similar to greenhouses—as a cost-effective way to extend the growing season and their on-farm income stream. But while high tunnels were popping up throughout many cold Northeastern states, in West Virginia they were not.

Until 2008 that is, when West Virginia University Extension Specialist Lewis Jett and his colleagues turned their attention to the technology, which has since proved invaluable not just for local farmers, but for local communities as well. That year, Jett received a SARE grant to begin a four-year project that taught hundreds of farmers and Extension educators how to use high tunnels successfully. The grant was a major impetus for the leap in adoption the state has recently seen: Whereas no more than 20 high tunnels were in use in 2007, there were more than 150 by 2012.

“Lewis has done a really good job getting this information out and available to farmers,” says Terry Hudson, who uses two high tunnels on a two-acre vegetable farm outside Charleston.

A state benefits from having a hundred new high tunnels because it means more healthy, locally raised food options are available to consumers. In West Virginia, schools have been particular beneficiaries. “It’s really helped our farm-to-school program,” Jett says. “That used to be an unattainable option for growers, but now that we have tunnels in place, it’s really an option.”

Jett, who provides technical assistance to the West Virginia Department of Education’s Farm to School program, says that the majority of the 75 to 100 participating farmers are now using high tunnels to help them meet cafeterias’ seasonal demand.

Hudson, who collaborates with Jett on education projects, has fully embraced the potential of high tunnels to support local schools. One of his two tunnels is essentially a classroom, where he hosts both periodic field trips and regular visits from small groups of children with mental and physical disabilities.

“You ask a kid if they want collard greens, they say no way,” Hudson says. “But if they start to grow it, they get really excited. It’s amazing how much they actually buy into their particular plot.”

In his second tunnel, Hudson grows commercial crops year-round, using intensive, carefully timed rotations: He raises high-value crops like tomatoes, peppers and eggplants in warmer months and leafy greens and root vegetables through the winter. By selling at farmers’ markets and to restaurants, he nets about $13,400 per year from that high tunnel. He gives credit to Jett’s work because, before Jett and his colleagues began researching, holding workshops and publishing fact sheets, there was no good information available on what crops you could grow in a West Virginia high tunnel, when you should try growing them, or how.

“We have unique micro-climates here–early and late freezes and frosts, strong winds and heavy snow,” Jett says. “These tunnels have really demonstrated that you can buffer the crop against our erratic climate and consistently grow a good crop.”